In early 2008, Virgin Mobile Canada and Virgin Unite, the non-profit foundation of the Virgin Group, joined forces to create the RE*Generation movement. RE*Generation aims to empower a generation to help its own and provide a national platform to discuss issues affecting at-risk and homeless youth.

Gaga joined the movement by doing a benefit concert at Circa, with the proceeds (totaling $35K) going to support the RE*Generation Canada partners, including Eva’s Phoenix, part of Eva’s Initiatives in Toronto, Broadway Youth Resource Centre in Vancouver, and the Youth and Philanthropy Initiative, an international in-school program that inspires youth to help their own generation. Gaga also had a little press conference at the housing facility to speak about why she decided to join the campaign. She signed autographs and took pictures with the kids. Before the show, she toured Eva's Phoenix, a youth shelter and RE*Generation partner. "This is a really amazing, transitional place", Lady Gaga said of the shelter. "If I can be inspiring to them and be a part of it, that makes me feel more powerful than any of the stage drama or the flashing lights.". 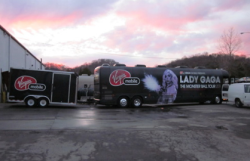 Virgin Mobile was one of the tour sponsor for The Monster Ball in 2009 to 2011 during the North American dates only. On December 1, 2009, Gaga recorded her pledge to the RE*Generation program that was shown before the opening acts. In the video, she encouraged people to text "REGEN" to 30333 to donate $5 to the movement, and for every dollar you donate Gaga personally matched it, up to $25, 000. The company also wrapped the official Lady Gaga tour bus and created an official microsite in support of the partnership (LadyVirginMobile.com).

Virgin Mobile and Lady Gaga partnered with homeless youth organizations and other LGBT youth organizations to provide volunteers who donated eight (8) hours of their time to help LGBT youth with free concert tickets. The volunteer program started with Lady Gaga's San Francisco concert on December 13 and include all U.S. cities on the tour through January 24, 2010. "I'm thrilled to partner with Virgin Mobile on my tour", said Lady Gaga. "They are a great brand and company and I'm really happy to see them encouraging my fans to help out homeless youth and the agencies that provide at-risk youth with critical support.".

On the American dates, Virgin had a photo booth where fans in costume was offered a free photosession and the photos were later uploaded on the Lady Virgin website and on Flickr. In 2011, the photos were added a Polaroid frame as to reflect her association with the company. http://www.flickr.com/photos/polaroidlittlemonsters/

During The Monster Ball, Virgin Mobile sponsored a segment where Lady Gaga calls one lucky fan in attendance, notifies the recipient that Virgin Mobile gives her $20,000 to donate the charity of her choice, and invites the lucky fan to come meet her backstage... in front of all fans in attendance. She also gave the friends and two of his/her friends new seats as her security will escort them to the mosh pit. The event was situated right after the performance of "Speechless". In 2010 to 2011, on the North American dates, she did a similar call.

They also created promotional contest in which ten bloggers are selected as official tour bloggers and are provided with exclusive access to the show and the venue.

Virgin Mobile and Lady Gaga have teamed up to create a FastPass initiative on LadyVirginMobile.com where consumers can sign up to be one (1) of 200 Monsters to skip the line with a special FastPass QR code and have their picture taken on the way in that is featured on the official tour site.

Virgin Mobile Canada hold a contest where their members could win tickets to see the show in Vancouver, Toronto, Montreal or Hamilton.

Virgin Mobile USA announced on December 20, 2012 that it is extending its award-winning relationship with Lady Gaga, and will be presenting her 2013 Born This Way Ball tour in North America. Through the partnership, Virgin Mobile will educate concert-goers on the issue of youth homelessness, calling on fans to step up to support both its Re*Generation program, which focuses on the issue, and Lady Gaga’s youth empowerment organization, Born This Way Foundation. One lucky fan selected at each show will have a $5,000 donation made to a local youth homeless shelter on his or her behalf – and then have the opportunity to increase the donation by spreading the word socially or volunteering for the cause. This fan will also get a special surprise from Mother Monster herself. Virgin Mobile will also be giving fans a variety of ways to get involved in helping raise money to make a difference. Fans at the shows will be encouraged to tweet pictures of themselves, and for every tweet Virgin Mobile USA will donate $1 to a local youth homeless shelter. In support of the Canadian tour stops, Virgin Mobile Canada will be motivating fans to donate to Re*Generation via a text-to-donate program. “We’re excited to be extending our partnership with Virgin Mobile after all of the success we’ve had together in the past, and all of the lives we were able to change”, said Troy Carter, ex manager for Lady Gaga. “We look forward to continuing to make a difference together”.  “There’s nothing stronger than the bond Lady Gaga has with her fans”, said Ron Faris, head of brand marketing at Virgin Mobile USA. “Every day, she inspires her fans to express themselves in new ways –to do more– and to always think of those less fortunate than themselves. It’s an ethos we share deeply at Virgin Mobile. And when we think of all the unique and crazy ways we use smartphones to connect fans to the things they love most (both on and off this tour), we’ll look to Lady Gaga as our model of inspiration”.  To take these smartphone social experiences to the next level, Virgin Mobile will be partnering with Samsung Mobile and their Galaxy line of handsets. Virgin Mobile will also be working with Lady Gaga’s social network for fans, www.littlemonsters.com, to provide ways for them to get involved and donate to Re*Generation even if they aren’t attending the shows.

Retrieved from "https://ladygaga.fandom.com/wiki/Virgin_Mobile?oldid=159781"
Community content is available under CC-BY-SA unless otherwise noted.