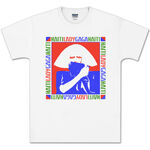 Although declining an invitation to record a benefit song. Gaga held a concert of The Monster Ball Tour following the 2010 Haiti earthquake and dedicated it to the country's reconstruction relief fund. This concert, held at the Radio City Music Hall, New York, on January 24, 2010, donated any received revenue to the relief fund while, in addition, all profits from sales of products on Gaga's official online store on that same day were donated. Gaga announced that an estimated total of $500,000 was collected for the fund.

During The Monster Ball Tour, program booklets were released including photos and concert information.

The first version was issued on November 27, 2009 at the Bell Center. It included photos from the The Fame Monster Booklet and promotional pictures from the music video for "Bad Romance".

I'll take you there

"So Happy I Could Die"

"So Happy I Could Die"

Add a photo to this gallery
Retrieved from "https://ladygaga.fandom.com/wiki/The_Monster_Ball_Tour/Merchandise?oldid=212508"
Community content is available under CC-BY-SA unless otherwise noted.