For other uses, see The Fame (disambiguation).

The Fame is the debut album by Lady Gaga. The album was first released in Canada on August 19, 2008 by Interscope Records. The main theme of the songs is about how anyone can feel famous like a celebrity. On December 2, 2009, The Fame was nominated for six Grammy Awards and won Best Dance Recording for "Poker Face". The album was nominated for Album of the Year, and won the Grammy Award for Best Electronic/Dance Album at the 52nd Grammy Awards. On February 26, 2010, The Fame went Diamond (signifying over 10 million albums sold) selling around 16 million copies world wide. On February 16, 2010, it won Best International Album at the 2010 BRIT Awards. On July 7th, 2010, The Fame became the best selling album in U.S. digital music history.

The writing of the album took around two years and a half and started in 2006. Some of the songs from the album come from her work with various producers (RedOne, Rob Fusari, KNS Productions) in 2006-2007 and the other half with her work after being signed to Interscope Records (Martin Kierszenbaum, RedOne). The songs are mostly inspired by Gaga's love of fame in general, and deals with the intricacies of a rich and famous lifestyle, visualized by her. Musically, the album drew inspiration from '80s electropop and synthpop while incorporating dance music and clear hooks. In regards to the title and concept of the album, Lady Gaga explained, "The Fame is about how anyone can feel famous. Pop culture is art. It doesn't make you cool to hate pop culture, so I embraced it and you hear it all over The Fame. But, it's a sharable fame. I want to invite you all to the party. I want people to feel a part of this lifestyle."

"I just feel like this record is really different- you[']ve got club bangers to more 70s glam to more singer-songwriter records to rock music. [...] The Fame is not about who you are—it's about how everybody wants to know who you are! Buy it and listen to it before you go out or in the car. [...] I think you've really got to allow artists' creativity to marinate. It took me a while but really delving into myself I finally got it. I couldn't be more proud of it. It's not just a record[,] it's a whole pop art movement[.] It's not just about one song."

Musically, the album drew influences from late 1970s glam rock musicians such as David Bowie and Queen. Gaga incorporated their glam-rock sound while devising catchy pop melodies and hooks to create what she has dubbed, "theatrical pop". Songs like "Poker Face", "Just Dance" and "LoveGame" are uptempo dance songs, with "Poker Face" carrying a dark sound with clear vocals on the chorus and a pop hook. "Just Dance" is synth-based while "LoveGame" has a more dance-oriented beat, and "Money Honey" has a moderate techno groove. All of them combined synths of clipped marching beats, sawing electronics and contained mild R&B-infused beats. "Paparazzi" carried a sultry beat while "Summerboy" had influences of the music of Blondie". "Eh, Eh" is credited as a ballad compared to the rest of the dance-fueled tracks from The Fame. The song has an eighties synth pop feeling in it while incorporating the "Eh, Eh" hook from Rihanna's single "Umbrella" (2007).

Lyrically, the songs on The Fame talk about being famous and achieving popularity. "Poker Face" is about sexual innuendo and teasing.Gaga explained in an interview with the Daily Star that the lyrics carry a bit of an undertone of confusion about love and sex. "Just Dance" talks about being intoxicated in a party, with lyrics like "What's going on on the floor? / I love this record, baby but I can't see straight anymore". "LoveGame" portrays a message about love, fame and sexuality which is akin to the central theme of album."Paparazzi" portrays a stalker who is following somebody being his or her biggest fan. The lyrics also portray the desire of capturing the attention of the camera as well as achieving fame. In an interview with MTV UK Lady Gaga explained about The Fame:In an interview with MTV Gaga explained about The Fame:

"This idea of 'The Fame' runs through and through. Basically, if you have nothing—no money, no fame—you can still feel beautiful and dirty rich. It's about making choices, and having references—things you pull from your life that you believe in. It's about self-discovery and being creative. The record is slightly focused, but it's also eclectic. The music is intended to inspire people to feel a certain way about themselves, so they'll be able to encompass, in their own lives, a sense of inner fame that they can project to the world, and the carefree nature of the album is a reflection of that aura. I like to funnel interesting ideas to the rest of the world through a pop lens."

"Paparazzi"
Add a photo to this gallery

To promote the album, Gaga did several performances worldwide. Her first televised appearance was on Logo's NewNowNext Awards on June 7, 2008. She also performed on So You Think You Can Dance, Jimmy Kimmel Live!, The Tonight Show with Jay Leno. She performed in Vietnam for the 57th Miss Universe beauty pageant during the swimsuit competition. On January 31, 2009, she performed on television in Ireland on RTÉ One's show Tubridy Tonight. Three songs off The Fame were used in The CW's series Gossip Girl: "Paparazzi" in the episode "Summer, Kind of Wonderful", "Poker Face" in "The Serena Also Rises", and "Money Honey" in "Remains of the J". Gaga also performed "Poker Face" on American Idol on April 1, 2009. To celebrate the launch of the show Dirty Sexy Money, ABC created a music video of Gaga's song "Beautiful, Dirty, Rich", directed by Melina Matsoukas. It was initially announced as Gaga's second single, but "Poker Face" was chosen instead. There were two videos released for the song – the first was composed of clips from Dirty Sexy Money, and the second was the actual music video. The song charted on the UK Singles Chart due to digital downloads and peaked at number eighty-three.

The album received further promotion from her first headlining concert tour The Fame Ball Tour, which started on March 12, 2009 in San Diego, California. It was Gaga's first concert tour with North American shows in March, followed by dates in Oceania and a solo trek through Europe. Dates in Asia soon followed, as well as two performances at England's V Festival and two shows in North America that had been postponed from April. Gaga described the tour as a traveling museum show incorporating artist Andy Warhol's pop-performance art concept. Tickets were distributed for charity also. Alternate versions of the show with minimal variations were planned by Gaga to accommodate different venues. The show consisted of four segments, with each segment being followed by a video interlude to the next segment, and it ended with an encore. The set list consisted of songs from The Fame only. Gaga appeared on the stage in new costumes including an innovative dress made entirely of bubbles and premiered an unreleased song called "Future Love". An alternate set list with minor changes were performed for European dates. The show has received positive critical appreciation with critics complimenting her vocal clarity and fashion sense as well as her ability to pull off theatrics like a professional artist.

For more, see this page.

To mark the 10 years anniversary of the album, Interscope created thefame.ladygaga.com, a time capsule website in August 2018. It includes a mix of photographs from that era with quotes from Gaga and a few select videos: The Fame: Part One, "Just Dance" and "Poker Face" and 46 episodes of GagaVision.

For the occasion, they also released The Fame 10th Anniversary Limited Edition USB on December 14, 2018. This USB edition was based on a similar 2009 USB release.

For the fonts used, see this page.

The official album artwork for "The Fame" features Lady Gaga's face, with her Crystal Glasses and Disco Stick. Gaga has said that she wanted to portray the look of an already established artist, as she had been making music for a long time prior to her album release. The cover has been compared to an old Italian Vogue magazine from the 70s to 80s, and expresses the idea of bringing back the concept of fame. This is suggested by the font used to write "LADY GAGA" which is a didone font similar to those used on the covers of Vogue, Elle and Harper's Bazaar. The nod to the 80s also comes from the font used to write "The Fame" which is similar to the one used on the cover of "Purple Rain" (1984) by Prince. Text on the US version is colored red instead of blue, and the image has a slight red tint.

©2008, Pieter Henket, Red version released in the US only.

The track listing of "The Fame" was intended to have a different song for the eighth track on each different localized version. "Money Honey" appeared on the Canadian version, "Starstruck" appeared on the US version, and the European release included "Vanity". However, she later released a revised edition with a modified track listing in the US on October 28, 2008 and in some countries where the album had not yet been released. A third version was released in Ireland and the UK on January 9 and 12, 2009, with a few further modifications to the track listing. As an exclusive to the online music store Rhapsody, "Vanity" was included on the third edition as an exclusive download single. 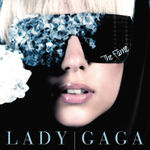 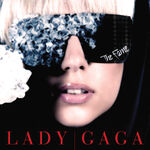 For the credits and the rest of the shoot, see Pieter Henket. For lyrics, see each individual song page.

The gallery below is a digital copy of the "Special Edition" booklet.

For a Moment by Joanne Germanotta, Lyrics to "Beautiful, Dirty, Rich", "The Fame"
(© 2008 Pieter Henket)

Credits and Thank you

The Deluxe Edition of The Fame have altered liner notes, changes are in bold. Name with a * were removed in the new version. Along the songs lyrics, For A Moment by late Joanne Germanotta is printed.

I am sitting in a hotel room in Vietnam. Preparing to perform on the first ever American/Vietnamese broadcast since the war. It really is the perfect time to write. There are so many people, places, and things that I need to thank for the success of this project. But before I begin, I need to say that each and every chemical moment of my life, every person I have spoken with, every street I have traveled, every museum, country, city, space or home that I have visited has been a profound instance and is mirrored, whether obviously or in some refracted way, in the work you see today. So if your name is not here, it is purely because this is the distilled version of my “thankyous.”

Thank you for teaching me the importance of family, and showing me the value of always sitting down to dinner together— and never taking a bite till everyone was present. And thank you to all the women in this family,for teaching me how to be one.

Bo, Arianne, and Tania. For being my only true friends

To my mentor Don Lawrence. You are the greatest and most gifted teacher I have ever had.Thank you for my voice, my work ethic, and my discipline.

Thank you for believing in me, your support means the world to me.

To FlyLife: Carmen, Peter, and my dear Martha, I love you so much. You were the first heartbeat in this project, and your support and brilliance means the world to me. I will always fight for the gay community hand in hand with this incredible team.

I would like to thank Andy Warhol, David Bowie, Prince, Madonna, and Chanel.

A poem for Joanne

For all the words you could not say
I promise they’ll be mine,

And when your brother calls for me
I promise I will come,

Cause when I feel that I may break
You heart, it makes mine strong”