TechHaus is the technical division of Haus of Gaga founded in 2012 to create the ARTPOP app. The division second project was the creation of a series of couture technologies to be unveiled throughout the ARTPOP campaign in partnership with Studio XO.

Following the presentation of the "Anemone" dress, Gaga revealed that it was the first in a series of couture technologies to be released by the TechHaus with Studio XO during the ARTPOP campaign.

Cipher
Add a photo to this gallery

Together with Relative Wave, TechHaus created the mobile app ARTPOP which was released on November 11, 2013. 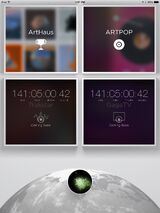 Album
Add a photo to this gallery
Retrieved from "https://ladygaga.fandom.com/wiki/TechHaus?oldid=180301"
Community content is available under CC-BY-SA unless otherwise noted.