Taylor Jacks Heisler Kinney (known as simply Taylor Kinney) was born on July 15, 1981 in Lancaster, Pennsylvania. He studied Business Management at West Virginia University, and eventually developed an interest in acting; as actor, can be seen on TV series’ such as Fashion House, Trauma, The Vampire Diaries, Shameless, U. S. Navy SEAL Jared in Zero Dark Thirty and Lieutenant Kelly Severide in Chicago Fire and Chicago P. D., etc.

He first met Lady Gaga on the set for the music video of "Yoü and I" back in July, 2011. Since then, the pair has a had a steady relationship. Lady Gaga has stated that he served as inspiration for most of the songs written for ARTPOP. On February 16, 2015, Gaga confirmed that she and Kinney were engaged after he proposed to her on Valentine's Day two days before. On July 19th, 2016 Gaga announced that her and Taylor have been taking a break in their relationship. 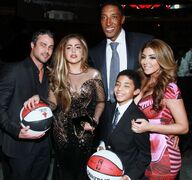 Retrieved from "https://ladygaga.fandom.com/wiki/Taylor_Kinney?oldid=226374"
Community content is available under CC-BY-SA unless otherwise noted.