This special edition had a 10 000 copy print limit, and each copy is numbered. Press received a unnumbered edition.

The core of the Super Deluxe Fame Monster Pack is the Book of Gaga, a highly stylized art table book housed in a custom splicase. The book document Gaga's journey into pop super stardom from 2008 to 2009.

A rumour of a book called Lady Gaga being shop appeared online in July 2009. “Lady Like will combine images with lyrics, diary entries, interviews, inspirations and quotes from Gaga’s heroes,” reads the proposal sent to publishers. In the fall of 2009, the Super Deluxe Fame Monster Pack was annonced by Lady Gaga's label, Interscope Records. Shortly after, a call for original artwork by fans was released on September 6 on LadyGaga.com :

"Well, the inspiration behind that was fanzines from the punk[-rock DIY movement] era in New York," she explained to MTV News. "Again this was a label conversation, where I said, 'I don't want this to be an industry overview of my life. I want to be able to give a real look at what I've been through to my fans.' What inspired me was the fan art. I have thousands and thousands of paintings, drawings, sketches, fashion designs ... photography from my fans. I published it all in this book."

The book include a photo taken of her in Moscow, where she had a near miss with Russian authorities.

"I was in my clothing from the show, which is not very different from what I'm wearing now," she said, explaining why the police confronted her. "But I didn't realize how conservative it was in Russia, because the nightclub I was in was not so conservative. And I got to Red Square, and then all of a sudden this police car pulled up, and we had to really get ourselves out of it. I had this photo [of the incident], and I decided not to show anybody, but I put it in the book."

The 3D Glasses was supposed to be "for things that will happen soon" but so far have no utilisation.

Upon the first opening, the book is wrapped in a tinted red plastic along with two cardboard puzzles. The cover of the Book of Gaga is made in a mirror-like foil. The book include various items such as two special 2 sided all black CDs of The Fame and The Fame Monster, a bookmark made from a lock of Lady Gaga's hair (from the Candy Warhol wig), 3D glasses, two pull out posters and a paper doll collection. Some of the pages in book are in smaller sizes than the rest of the book. These four "fanzines" include The Fame booklet, a behind the scene/Making of the Haus of Gaga, a collection of Lady Gaga's tweets and some art collected from fans around the world.

These are some of the art found in the book selected by Lady Gaga. 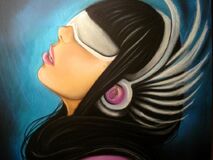 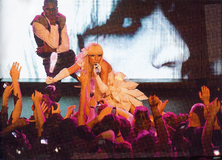 The Fame Ball - Release Party. Photograpgy by Robin Roemer.
Add a photo to this gallery

These are some of the original pictures found in the book, unedited.

The first CD is the censored version of The Fame Monster.

Retrieved from "https://ladygaga.fandom.com/wiki/Super_Deluxe_Fame_Monster_Pack?oldid=206448"
Community content is available under CC-BY-SA unless otherwise noted.