Saturday Night Live, often referred to as simply, SNL, is a late-night television show that blends comedy with variety performances. It originated in the United States during 1975, originally titled NBC's Saturday Night.

Lady Gaga was featured as the guest musician, Ryan Reynolds as the guest host, and Madonna made an appearance during one of the skits. The program was split up into a few sections. 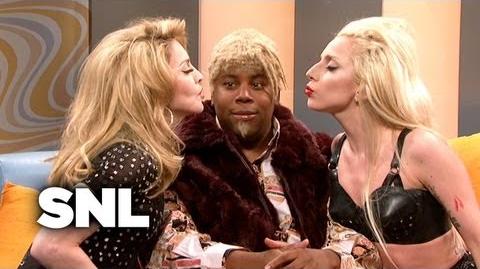 Lady Gaga wears a bra by Atsuko Kudo, and boots by Pleaser.

Gaga's first musical performance was "Paparazzi", which featured two female back-up dancers. The version that was performed, is a remix that was reworked by Fernando Garibay. During the second musical segment, Gaga is seen sporting The Orbit outfit as she performed "LoveGame", while standing on a revolving platform. She then moved to a piano and debuted a short acoustic version of "Bad Romance". To end the performance, she sang a New York inspired rendition of "Poker Face".

Born in New York, in Lenox Hill of '86
Cheered for the Yankees with my dad in Section 6
And after traveling, just dancing round the world
I still prefer a beer and whiskey with my friends on Rivington street

I miss every little thing about the city
Subway trains
The girls are pretty
Love the hot dogs on 72nd street
They're tasty and they're cheap
Was just a waitress on Cornelia
Now I'm living my dreams baby, oh
Singing about my Poker Face
New York
It's Saturday night

Ready to go to the afterparty, Andy Samberg is embarrassed to discover that he's dressed in the same set of clear balloons as Lady Gaga.

Lady Gaga, wearing an extravagant outfit of clear balloons, reads a copy of “Rolling Stone” with her on the cover, leaning against a desk. A STUDIO PAGE is seated right behind her.
Lady Gaga: Cute.
ANDY SAMBERG, strolls in, wearing a similar outfit made of balloons. He approaches the page.
Andy Samberg: Hey Fred, did that fruit come in?
Page: Yeah, I’ll go get it.
The page departs. Andy exhales as he saunters over to Gaga. He scans her outfit.
Andy Samberg: Oh no.
Both view their outfits.
Lady Gaga: No way.
Andy Samberg: This is weird.
Lady Gaga: I can’t believe it! I spent $20,000 on this dress.
Andy Samberg: Yeah! And I made this out of garbage.
Both nervously laugh
Both: FASHION!
Andy Samberg: Well, I guess I’ll go change.
Lady Gaga: No, wait. Andy, I think it looks really great good on you.
Andy Samberg: Really?
Lady Gaga: Really.
Andy Samberg: I guess great minds do think alike.
Both turn and face the ground. ROMANTIC MUSIC cues in. A lighted backdrop of red stars forms behind both of them.
Lady Gaga: Kiss me, Andy.
Both plunge towards one another to lock lips. The outer mass of the balloons prevents them from kissing. Both struggle to meet at the lips. Both pull back.
Andy Samberg: We can’t do this.
Lady Gaga: Why? Are you married?
Andy Samberg: No. I mean I can’t do this. I physically can’t reach you.
Lady Gaga: Prove it.
Both launch onto each other, still unable able to kiss. They struggle for a moment or two, and then pull back.
Andy Samberg: Damn it, Gaga! Just marry me.
Lady Gaga: Fine. Under one condition…
Andy Samberg: Anything.
Lady Gaga: I want a divorce.
Andy Samberg: You cagey son-of-a-bitch!
Gaga gasps and slaps Andy. Both try to make out, but fail.
The CAMERA PANS over to KRISTEN WIIG and LORNE MICHAELS watching the events unfold.
Kristen Wiig: I guess I got to find something else to wear to the party.
Lorne Michaels: Yeah… me too.
Kristen and Lorne glance onto Lorne’s necktie. It’s covered in miniature clear balloons. 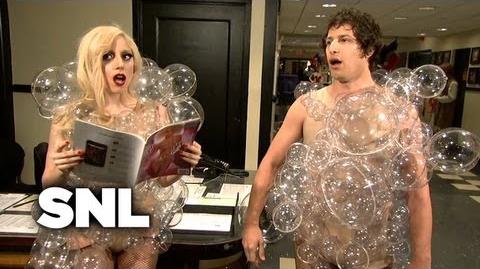 Lady Gaga wears a dress by Fade and sunglasses by Linda Farrow for Alexander Wang.

Lady Gaga was confirmed to appear on the show on April 17, 2011. The episode will be hosted by Justin Timberlake. During the episode, she performed the first 3 singles from the album Born This Way. She also acted in 3 different skits during the show, one with Justin Timberlake and Andy Samberg entitled "3-Way (The Golden Rule)" where they realize it's "okay in a three-way".

Lady Gaga with Justin Timberlake and Kristin Wiig entitled "Liquorville", where Wiig is trying to entice customers to her new store, to then be harassed by Timberlake and Gaga advertising Liquorville. 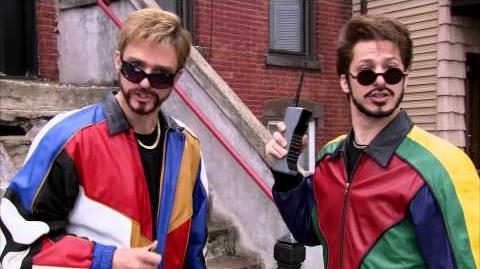 During the episode, Gaga performed the first 3 singles from the album Born This Way. 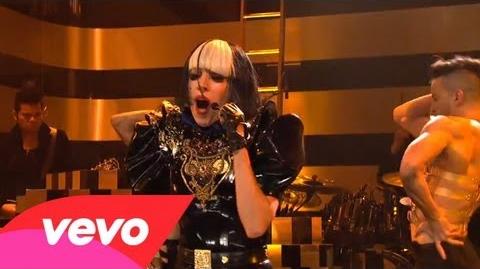 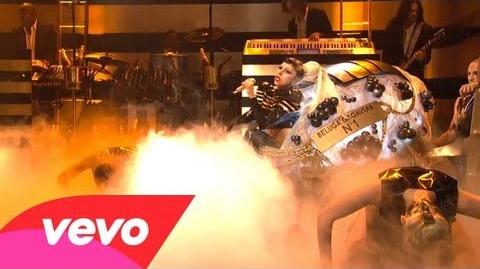 Born This Way (Live on SNL)

Lady Gaga with Justin Timberlake, where a host brought on different mystery guests or images, and Timberlake and Gaga had to guess who it was, with Gaga winning outright as Timberlake not remembering Chris Kirkpatrick's name from his Band 'N Sync.

Lady Gaga wears a jacket by Void of Course.

Alternate
Add a photo to this gallery

Lady Gaga wears an outfit by House of Harlot, and glasses from Dog.

Lady Gaga was both the host and musical guest on this episode. During the episode, she performed the three songs from the album ARTPOP, as well as acting in seven different skits during the show.

Lady Gaga wears a dress by Versace, a bracelet by Dannijo, and a custom headpiece by Erickson Beamon.

Gaga looks lovely in a sparkly dress and Marilyn Monroe esque hair. Her monlogue slowly morphs into a “Chicago” style performance of "Applause". The humor comes from her "gratuitous" attempts at audience applause ("Give it up for teachers!"), which subsequently morphs into "New York, New York".

Kim Kardashian and Kanye West interview an employee of the Apple store, a nerdy Gaga. Kanye quickly takes exception to the Apple employee’s “genius” title, proclaiming that he and Kim are the true geniuses. While most of the humor in the skit came from the Kim/Kanye lines, the nerdy employee noted at one point that “people who try too hard with their outfits are maybe hiding something.” 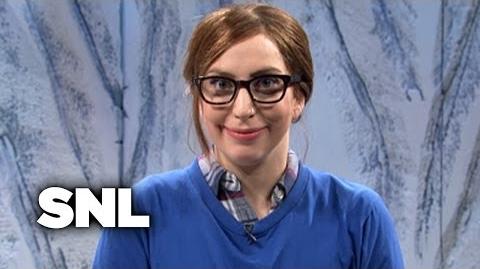 Worst Cover Songs Of All Time

Adam Duritz from Counting Crows pitching an album called “WHAAAT.” Gaga sings "Born This Way", which was confused for Madonna's "Express Yourself".

Gaga's first musical performance was "Do What U Want" with R. Kelly. During the second musical segment, she performed "Gypsy" at pink piano and wearing a dress that appears to have shoulder pads that double as butterfly wings. 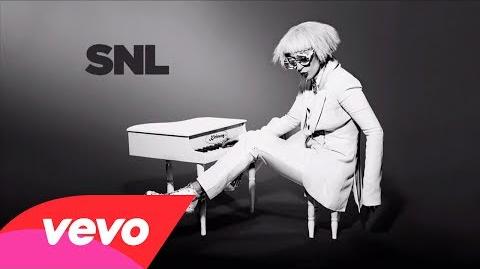 Do What U Want (Live on SNL) 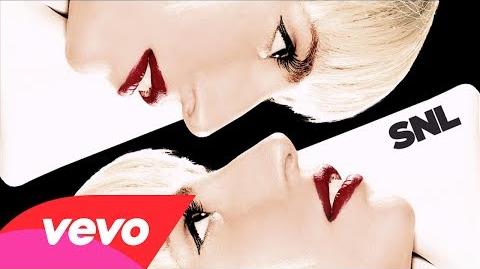 Gaga plays a tough tenant who claims the Marissa Tomei character in My Cousin Vinny was based on her as she and other grill potential new tenants. 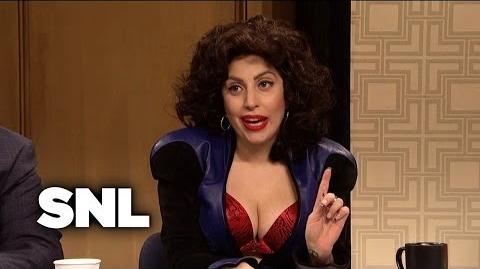 Gaga plays several campers who over-exaggerate their roles. She was kind of funny as Forest Gump’s mother. 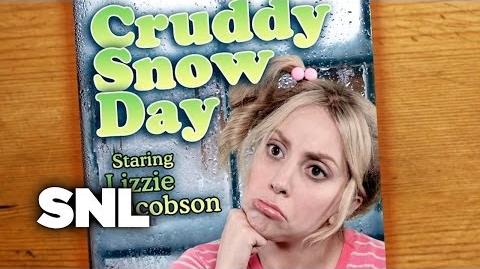 Employees of Blockbuster lament the closing of the chain, then enter a dream sequence that includes Queen Gaga whipping them with licorice. They awaken to realize with relief that (spoiler alert) they are actually Best Buy employees. 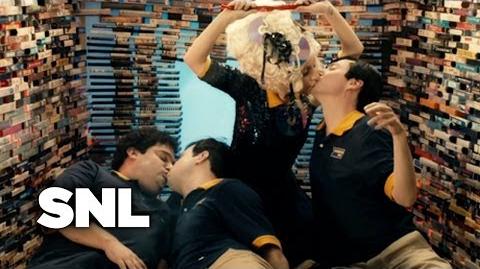 Gaga plays an over-enthusiastic couple (Gaga is the mother) encourage their fourth grade daughter as she performs what ultimately turns into a strip tease. 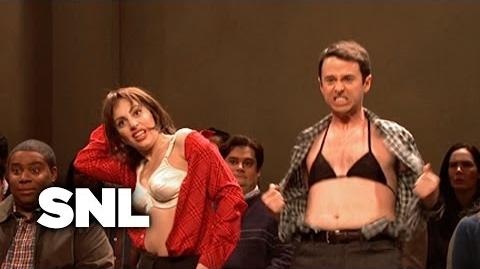 Fast forward to 2063, to the point when 77 year old Gaga is kind of a washed up mess trying to impress the maintenance guy who has never heard of Lady Gaga. She tries to perform some of her old hits to spark his recognition of her. He remembers "Born This Way" but only as a jingle. He apologizes for not recognizes her but explains that he’s more into classic rock (like One Direction). 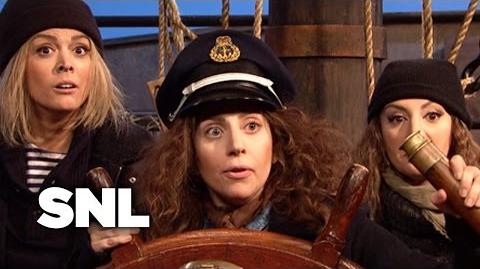 Lady Gaga wears a bra by Victoria's Secret, a dress by Versace, and pumps by Giuseppe Zanotti.

Lady Gaga wears a gown by Atelier Versace, a necklace by Rodrigo Otazu, and a hat by DSquared2.

[2] Tagged
Add a photo to this gallery 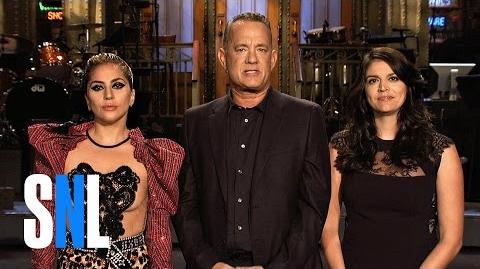 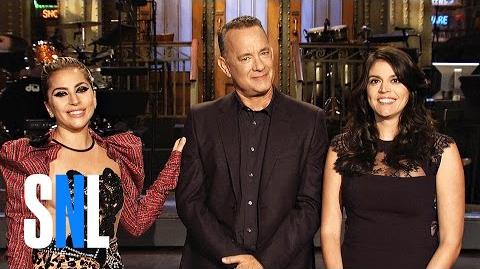 SNL - Joanne, Cubby and Tor Will 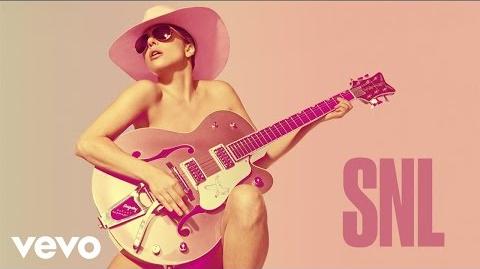 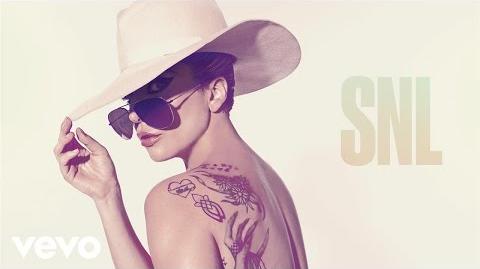 Final
Add a photo to this gallery

Retrieved from "https://ladygaga.fandom.com/wiki/Saturday_Night_Live?oldid=260888"
Community content is available under CC-BY-SA unless otherwise noted.