Roger Vivier (1907–1998) was a French fashion designer who specialized in shoes. His best-known creation was the Stiletto heel. Vivier has been called the "Fragonard of the shoe" and his shoes "the Fabergé of Footwear" by numbers of critics.

He designed richly-decorated shoes that he described as sculptures. He is credited with the design of the first stiletto heelin 1954. Vivier designed shoes for Christian Dior from 1953 to 1963.

The brand is owned by Diego Della Valle from 2003. 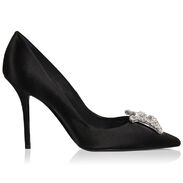 Retrieved from "https://ladygaga.fandom.com/wiki/Roger_Vivier?oldid=233296"
Community content is available under CC-BY-SA unless otherwise noted.