Puke on Gaga is the name of an interlude featured in both versionz of the Monster Ball (Theater and Arena). Unofficial names used by fans include Vomit Interlude, Exorcism, and Puke & Blood, but the name used to refer to the segment was Puke Film on the official set list for the first Monster Ball.

The film was shot in 2009. One of the scene feature Gaga being dressed like a mannequin by her then creative director, Matthew Williams. This part was inspired by "The Bridgegroom Stripped Bare", a performance in the Transformers series by Nick Knight in 2002. The film featured Alexander McQueen with Sarah Burton as they transforms a bridegroom into a bride in a frenzy of cutting, ripping, painting and gaffer-taping. McQueen was famous for his cutting and draping skills, often working directly on a garment while a model was wearing it. This film offers a rare glimpse of the designer at work, in what is usually an unseen, intense and private act. The parts in which Gaga consumes the Bovine heart was created by Nick Knight to help Gaga confront her fears about her father's open heart surgery.

The film was put for sale on SHOWstudio shop as Puke On Gaga for £ 4,000 and the film was shown during their exhibition called Inside/Out in 2010. On the same website, the dress Lady Gaga wears at the beginning has been put on sale for £ 15,000.

On the Monster Ball: Theater, the film was shown on the back screen of the stage with a closeup of the middle of the film on each of the two side screen. Dancers crawled on the floor with fog around them. The song used was shortened edit of "Tears In The Rain" by Zomby. The lyrics are from Blade Runner, the dying replicant, Roy Batty (Rutger Hauer), introspectively says the phrase, during a rain downpour, regarding his own death:

I've seen things, you people wouldn't believe, hmm
Attack ships on fire off the shoulder of Orion
I've watched C-beams glitter in the dark near the Tannhauser Gate
All those moments, will be lost in time like tears in the rain 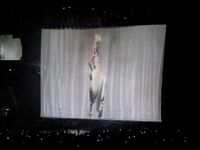 On the Monster Ball: Arena, the stage was covered by a giant screen projecting the film. The song was a reworked version of "Dance in the Dark" by Fernando Garibay.

All the cut of the video began with Gaga standing on a white cube wearing a pleated white dress by Marko Mitanovski [A]. Later, she is shown sitting while performance artist Millie Brown pukes some bright green vomit on her.

On the Monster Ball: Theater there were two versions played at the shows. In the early dates it was displayed on the stage screen curtain in full size and on later dates it was displayed in the three screens. The first scene of the early version starts with a very slow white fade-in transition and then Gaga is shown wearing the pleated white dress while it moves in slow motion. Seconds later there's an abrupt cut and the dress starts to move faster. After this scene another white fade-in happens while Millie can be seen retching. Right after short shots of Millie puking on Gaga are shown in slow motion. In the last scenes is Gaga being dressed liked a mannequin by Matthew Williams [D]. (* On the second version of the Desert film the start white fade-in was made 10 seconds shorter and a glitch in the first scene was fixed.)

On the Monster Ball: Arena, the next scene was Gaga eating a bovine heart [B]. At this point, two versions was shown: 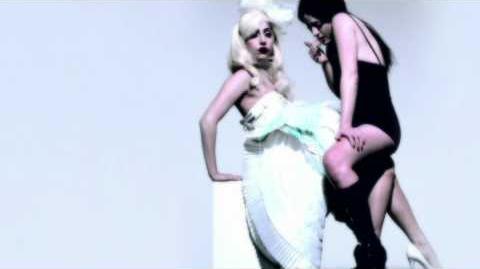 In 2014, Millie Brown appeared on stage and re-enacted the film during Lady Gaga's performance of Swine during SXSW.

Retrieved from "https://ladygaga.fandom.com/wiki/Puke_Film?oldid=237816"
Community content is available under CC-BY-SA unless otherwise noted.