Prabal Gurung (Nepali: प्रबल गुरुङ) (b. March 31, 1979) is a Singapore-born Nepalese-American fashion designer based in NYC. He went to St. Xavier's School, a Catholic Jesuit school in Kathmandu, where he finished his high school education. Then Gurung went and did his Hotel Management from the National Council of Hotel Management, Catering Technology & Applied Nutrition, Dadar, Mumbai. Post his Hotel Management, he began his designing career in New Delhi, India. While studying at New Delhi’s National Institute of Fashion Technology, he apprenticed at several local production and fashion houses, and designed with Manish Arora. In 1999, he moved to NYC, where he interned for Donna Karan while attending Parsons School of Design. He became the design director at Bill Blass, and Gurung launched his own collection during New York Fashion Week in February 2009 at the FLAG Art Foundation in Chelsea. 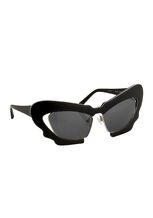 Retrieved from "https://ladygaga.fandom.com/wiki/Prabal_Gurung?oldid=251478"
Community content is available under CC-BY-SA unless otherwise noted.