This short interlude was the first time Gaga presented Pop as a Monster who ate her heart. The concept was expended in 2009 into the Crevettes Films featuring Candy Warhol and a mysterious man. This particular story echoed in "Monster" with lyrics taken from this interlude (He a-a-ate my heart). The video have Gaga with a white shirt bleeding pink blood. Birds are flying towards her during the whole interlude.

I really don't remember when. But it was quick and then was dead.
Before I knew the thing inside, I felt something was gone, I cried.
He ate my heart, he a-a-ate my heart. Pop ate my heart
and I became a slave, to what? To his LoveGame 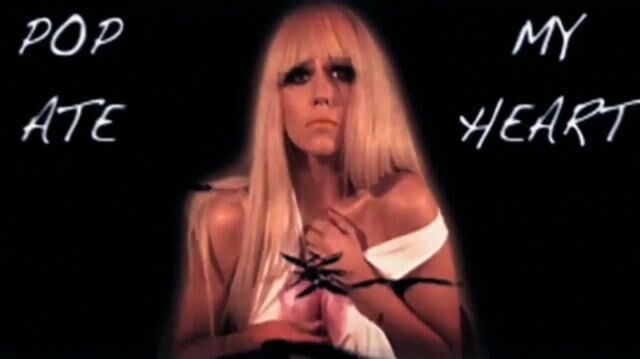 Retrieved from "https://ladygaga.fandom.com/wiki/Pop_Ate_My_Heart_(interlude)?oldid=248578"
Community content is available under CC-BY-SA unless otherwise noted.