Gagapedia
Register
Don't have an account?
Sign In
Advertisement
in: Technology companies, Products and endorsement, Photographers,
and 4 more

On January 5, 2010, owners of the Polaroid™ brand announced a multi-year strategic partnership with Lady Gaga, who will serve as the creative director for a special line of Polaroid Imaging products. Gaga made a special appearance at the Polaroid booth at the 2010 Consumer Electronic Show (CES) in Las Vegas on January 7, 2010, to talk about her new creative and business relationship with the Polaroid brand. 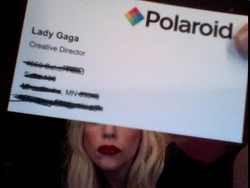 A Polaroid insider said “Lady Gaga’s broad creative talents and the way she connects with her fans in her own unique manner made her a natural choice for Polaroid.” One of Polaroid's new owners, Jamie Salter of Hilco Consumer Capital said “Lady Gaga is a great creative talent who has a lot of passion for this brand." 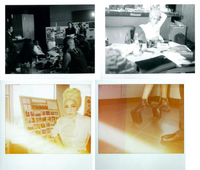 “Obviously, the design’s pretty wacky but it’ll definitely appeal to her fans, and with over 10 million of them on Facebook, we’re pretty sure this will do well.” The then unnamed Gaga Polaroid will be one of the company’s analogue range in the style of the recently released Polaroid 300 which harks back to the old instan t cameras. It won’t produce the famous 4 x 4 prints, but instead will expose an ink-made 3 x 4 size with the traditional white border, the like of which can also be printed out from any camera using the most recent sized PoGo. 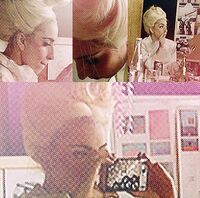 On Saturday April 17th, Lady Gaga, the Polaroid Creative Director, led a creative team meeting in Tokyo to collaborate on designs for upcoming co-branded products. The partnership is all channeling Lady Gaga’s fashion sense to create innovative products with her fans in mind.

The collaboration will deliver new products that mix the best of “instant” with digital era multi-media. Lady Gaga has a personal connection to the Polaroid experience that she wants to share with the world through the introduction of products that will appeal to a new generation –building on the Polaroid movement into the future.

Lady Gaga posed for a Polaroid at the museum run by the Massachusetts Institute of Technology.

The museum took possession of thousands of Polaroid inventions that revolutionized photography in the 20th century, including the 20-by-24-inch camera that snapped the photo of Lady Gaga. An exclusive Polaroid of Lady Gaga, Polaroid creative director, was unveiled at the MIT museum on June 30.

Lady Gaga decided to have several product placements in her music video for Telephone.

V Magazine‘s “A Gaga Journal” hit newsstands on May 11th. The journal is the work of Lady Gaga and Matthew Williams, and is meant to serve as a window into the life of Lady Gaga. It was only fitting that the new Creative Director of Polariod document her life with Polariod pictures. The collage includes Lady Gaga looking like she’s covered in mud in a shower, a photo of a rose, and a sky.

A year after announcing their partnership, Lady Gaga and Polaroid unveiled their first join venture together. “Polaroid Grey Label” is a combined effort between Gaga and the Polaroid and was shown to the world for the first time on January 6th.

"A year in the making, Polaroid Grey Label is a collaboration between two of the most influential icons of our time. Polaroid and Lady Gaga. Join us at Polaroid.com as we reveal the next generation instant experience. Live from CES in Las Vegas. January 6th, 2011 at 3:30pm PST." - Polaroid

The GL10 Instant Mobile Printer is one of the three products thats part of the Polaroid Grey Label by Haus of Gaga and Polaroid. It is compatible with all Bluetooth capable cellphones except iPhones, which wil not connect for unknown reasons. The GL10 also works seamlessly with its own smartphone app giving phone users many creative options. The app lets users capture, crop and add effects, including photographic filters and a wide range of custom-designed borders. The GL10 was released first on Bloomingdale’s 59th st. flagship in New York City and was rolled out to select Bloomingdale’s nationwide in late June. Pre-orders for the GL10 were also  available at Polaroid.com and became available on hsn.com starting May 27, 2011. In addition to Bloomingdale’s, the GL10 launched to consumers nationwide on June 17, 2011 on HSN. Costco.com received the GL10 starting on June 20, 2011.

If a photo is taken on a cellphone with bluetooth capability, then it can send pictures to the printer. You have to go to your 'Manage Connections' and turn bluetooth on. Then you go to 'Set Up Bluetooth' and search for the device. The device name is "Polaroid 000000". Send a photo using Bluetooth to the printer, insert the password, and in about 40 seconds the picture will be printed. A USB cord can also be connected that allows printing photos from computers or the GL20 Camera Glasses.

During Lady Gaga's speech at the CES 2011, Lady Gaga revealed the inspiration for this printer. When Polaroid asked Lady Gaga what the camera of the future is, Gaga responded that cellphones were. She went on to explain, "I have tons of fans. I have arena shows every night with 20,000 thousand little lights flashing at me as they take pictures on their cell phones the entire show. So I said 'How can we bring the cell phone into Polaroid? How can I take something that is digital, that is almost never printed, into something that is instant? ' So we created this printer."

The GL20 Camera Glasses is one of the three products that's part of the Polaroid Grey Label by Haus of Gaga and Polaroid. They were inspired by the iPod LCD Glasses. Out of the three products, it's the only one that remained unreleased. In April of 2012, Polaroid released the following statement regarding the release of the product:

The retail plans are still being developed as we complete product development. The GL20 Camera Glasses are a unique product and blend of technology and fashion and Polaroid will release them when they feel that all aspects are perfect; up to Polaroid and Lady Gaga's very high standards. We will share additional details once more information becomes available.

They are capable of being worn out in public. They can take pictures and videos. The pictures are able to be sent to the GL10 Instant Mobile Printer. The pictures and videos register to the arm-piece which serves as a USB port that can be removed and connected to a computer. Videos and photographs can be uploaded onto the camera for display. The user can either manually take pictures or set up a shutter that snaps a photograph either every 10, 30, or 60 seconds.

During Lady Gaga's speech at the CES 2011, Gaga revealed the inspiration for the glasses. "These are something I envisioned many years ago when I did The Fame Ball Tour. I made these glasses out of iPod screens (iPod LCD Glasses) that I strung together to make glasses that can play movies, and I thought 'Wouldn't it be wonderful if these were functional.' So we created the first ever camera that is also sunglasses".

Gaga with the glasses

The GL30 Instant Digital Camera is one of the three products that's part of the Polaroid Grey Label by Haus of Gaga and Polaroid. It is set for a holiday 2011 release.

The camera is able to take and view pictures before printing. It takes regular Polaoid pictures that registers digitally as well as a regular photo. Each cartridge can print up to ten photos. It is capable of sending the photos taken to social media sites like Facebook, Twitter, and/or MySpace.