The Poker Face Film is an film of The Monster Ball Tour. All the interludes and backdrops from the show were created by Nick Knight (Director) and Ruth Hogben (Editor).

Three versions of this film were edited but only one shown at concerts. The first one, during the first leg of the tour which consisted on black diamonds with a grey drop shadow inside a red screen (where the closeup of Gaga's face appeared throughout the song as she blinked or gesticulated.) *During the bridge the screen becomes full red and Gaga appears in a loop moving her tongue, smiling and showing her teeth. In the first unused version a looped closeup of Gaga appears rolling her eyes while the last part of the song is played and the image fades out to black as the song ends. In the shows that this first film was used Gaga appears again during the Space Cowboy remix outro blinking her eyes while the colors turn negative in fast motion.

Performing in Vancouver
Add a photo to this gallery

An alternative version was created after this first one which showed closeups of Gaga in color gesticulating inside transforming poker figures. During the Space Cowboy outro a lot of poker figures appeared on the screen with Gaga gesticulating in fast motion as color bubbles move all across the screen. It was probably intended for the Arena version of the tour but for unknowns reasons it remained unused. This version was released by SHOWstudio on October 7, 2011. 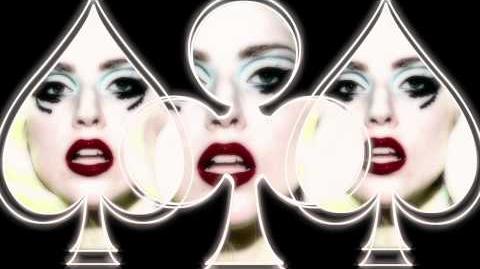 Retrieved from "https://ladygaga.fandom.com/wiki/Poker_Face_Film?oldid=261893"
Community content is available under CC-BY-SA unless otherwise noted.