Philip Treacy is a Britain millinery designer from County Galway, Ireland. Treacy was reluctant to work with Gaga as she reminded him of the late Isabella Blow. It was Alexander McQueen who called him and said: "You have got to work with Lady Gaga! She has got the same boobs as Isabella!" From there, he agreed to work with Gaga. In 2010, a rumor of Gaga wanting to intern at Treacy's studio surfaced in the tabloids. During an interview with the Guardian, Treacy confirmed her intention to intern but that she had to learn how to sew and will be treated as any regular intern. In December, Treacy revealed that Gaga did her internship but that she wasn't very good at sewing. He told her that she should stuck to writing songs as she is better doing that. 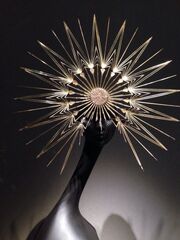 "Telephone" Music video (2010)
Add a photo to this gallery

Steven Klein (2015)
Add a photo to this gallery

"Stupid Love" Music video (2020)
Add a photo to this gallery

Retrieved from "https://ladygaga.fandom.com/wiki/Philip_Treacy?oldid=255536"
Community content is available under CC-BY-SA unless otherwise noted.