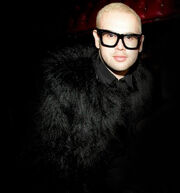 OLIMA is a designer brand founded by Oscar Olima (5 October, 1984), a LA fashion designer who founded his own brand in 2008. He studied at Los Angeles Community Vocational-Technical University.

OLIMA revealed to Gaga Fashionland that he was inspired by Gothic 19th century horror and “wanted to keep within the Bad Romance theme implementing unorthodox sewing details around the collar and used a familiar texture to give a true horror finesse”. It was also created to mirror the latex cape worn by Gaga on the cover of "The Fame Monster" which was created by House of Blueeyes.

OLIMA explained to Gaga Fashionland that “This time I felt I had more time so it was definitely an opportunity for me to create something more intricate. I started with the black vinyl strip cape that was completely inspired by the Lady herself…” “… I noticed the cape caught light beautifully so in my head hundreds of strips would catch a million more lights. The cape took me about a week to create and I was designing it in my head as I was making it”. To go along with the cape, a pair of hair shades were created by hairstylist St. Peter for OLIMA. The sunglasses were worn on select dates.

A week later after the creation of the black vinyl strip cap, OLIMA received a request from Nicola Formichetti of Haus of Gaga to make a complete bone look inspired by Gary Card's skeleton headwear. It took OLIMA 48 hours to create the dress. OLIMA told Gaga Fashionland that he “was still very much fascinated by the detail of the shoulders I had given the black cape so I decided to use a similar one on this jacket dress and just mold the strips into ribs and a spine on a sculpted bodice”.

OLIMA wanted to make the purple glitter look chic so he “decided to leave it up to the stars and go for a constellation type feel with the detailing. I managed to finish everything within a matter of 2 days but I couldn’t do it without the help of my amazing team”.

The dress was worn once during "Just Dance" at the Monster Ball: Theater on December 31, 2009.

For this creation, OLIMA explained to Gaga Fashionland that Gaga wanted “something glittery and metallic with a similar feel as the bone piece I had previously created for her. I used actual glitter which believe it or not I have never worked with. The whole project was completely organic, I didn’t do a sketch nor did I plan out what I was doing, I just had a feeling in mind which was Ice Queen for the silver piece. I collaborated with Franc Fernandez on this look. He is an amazing individual to work with”.

OLIMA told Gaga Fashionland that he “thought if Lady Gaga is doing punk, she has to do it over the top and to the extreme because punk isn’t about being subtle. The dress is made from a variety of studs not just one kind to keep the look more authentic”. The gold studded leg brace was constructed by fashion stylist Brett Bailey for OLIMA.

OLIMA created Beyoncé's dress and the dancers' custom made denim outfits with Franc Fernandez. The dress for Beyoncé was made of silk with Swarovski triangle crystals. The stripe effect on the bodice was made using 200 individually sewn red and white silk chiffon strips. The destroyed denim jeans were created by Olima in collaboration with Franc Fernandez. They also created the denim shorts that Beyoncé is seen wearing in the music video.

All of the creations were used in the music video for "Telephone" in 2010.

Retrieved from "https://ladygaga.fandom.com/wiki/Olima?oldid=242514"
Community content is available under CC-BY-SA unless otherwise noted.