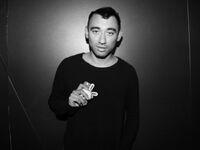 Nicola met Gaga in 2009 for the The Beauty Issue of V shot by Sebastian Faena [2]. He gave her the Nasir Mazhar orb hat and she wore it straight away on The Ellen DeGeneres Show the next day. At the beginning of their collaboration, Nicola had to use his name in order to secure clothes for Gaga as many designers were reluctant at first. At the time, “music stylists were just doing music people, and fashion stylists would never touch music people. I loved her and wanted to work with her, even though those around me were not really supportive.” (Daily Front Row, 2018)

The two became best friends and did their first official collaboration at the 2009 MuchMusic Video Awards on June 21, 2009. After that, Nicola became a part of the Haus and was one of three most well-known members at that time, along with Laurieann Gibson and Matthew Williams.

For his works with Gaga, Nicola usually had a few assistants with him. Two of the most frequent assistants were Anna Trevelyan and Brandon Maxwell. All the work below is credited as "Fashion Director" unless noted.

Formichetti revealed in 2013 to WWD that he was no longer an active member of the Haus of Gaga and that his former assistant Brandon Maxwell replaced him.

"She's going to be my BFF forever, but my ex-assistant Brandon is heading that project. I’m too busy with [other commitments]. I’ve done two albums with her, it’s been like five years, and you know, I’m always going to be involved somehow, but I cannot do it every day. She changes 12 times a day; it’s insane."

In July of 2018, Nicola and Gaga reunited professionally on a promo photoshoot for Enigma with frequent collaborators Inez and Vinoodh. Nicola joined Haus Laboratories in 2019 as Creative Consultant. That same year, he moved from New York to Los Angeles to be closer to Gaga who lives only a few blocks away. He curated HAUS OF GAGA/LAS VEGAS, a residency museum which included iconic fashion pieces from Gaga personal vault spanning more than 10 years of cultural, musical and fashion reinvention. For the Chromatica era, that started in January of 2020, Nicola returned as Fashion Director on all the projects with his partner, Marta del Rio.

"The Edge of Glory"

In September 2011, Nicola Opens Pop-Up Store in NYC. The style of this visionary is revealed at a new concept store, done in collaboration with Gage/Clemenceau Architects. Injected with the pop art of Warhol and the grunge of old New York and the craze of Gaga, the shop comes to life with reflective floors, red leather studded vests and lingerie and 3-D animations. Haus of Gaga looks including the singer's costume from her blood-drenched "Paparazzi" performance at the VMA's, towering Mugler shoes and clothing, and Vintage Versace pieces are all on exhibit in this cave of ingenuity. Formichetti's muse and model, Rico, also known as the Zombie Boy, who stars in Lady Gaga's "Born This Way" video, will be stopping in throughout the week.