In the fall of 2008, Silas participated in a audition to be one of Lady Gaga's four new male dancers. He became one of dancers along with Asiel Hardison, Ian McKenzie and Anthony Lofendo selected by choreographer Laurieann Gibson with Lady Gaga. He received the Haus name of "Mikey Mugler", a mix of a nickname derived from his name and designer Thierry Mugler. Silas was part of the main dancers at the Haus of Gaga from 2008 until July of 2011. The reason of his leaving was not disclosed. 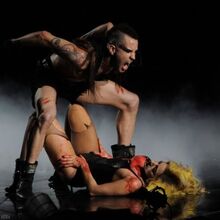 On August 19, 2010, after "Bad Romance" Gaga revealed to the crowd that Silas and Hardison were dating since their trip to Jerusalem that happened a year prior to that. During his interview with After Elton in 2012, Silas said that he was single. The duo were seen kissing after "Alejandro" for Gagakoh on April 20, 2010 and on the Monster Ball: Arena also at the end of the song.

On the Monster Ball: Arena Version, Silas had a regular segment on the show after "Teeth". Gaga would introduce the Haus one by one. Gaga usual speech for Silas as recorded on the DVD of the tour was as follow:

Work with the Haus of Gaga

Go back to dancers

Retrieved from "https://ladygaga.fandom.com/wiki/Michael_Silas?oldid=254139"
Community content is available under CC-BY-SA unless otherwise noted.