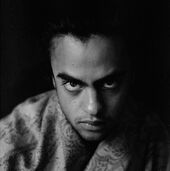 Michael Avedon (born January 16, 1991) is an American photographer living in New York City. Avedon began experimenting with photography in 2006, and in 2012 was named in Forbes Magazine's 30 Under 30 list of up-and-coming artists. Avedon's commercial work consists primarily of fashion photography, including work for Louis Vuitton, Calvin Klein, Harper's Bazaar, CR Fashion Book, and Dazed & Confused. In the spring of 2013 he graduated from the International Center of Photography.

Raw
Add a photo to this gallery

[5]
Add a photo to this gallery

Retrieved from "https://ladygaga.fandom.com/wiki/Michael_Avedon?oldid=241770"
Community content is available under CC-BY-SA unless otherwise noted.