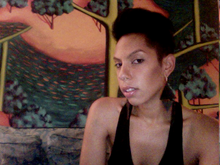 Melina Matsoukas (Μελίνα Ματσούκα, born on January 14, 1981), is an a Greek, Jewish, Jamaican and Cuban descent; and an American music video director. Matsoukas is a graduate of the American Film Institute and New York University.

Matsoukas started out at the now-defunct Gorilla Flix film production company, and currently works for Black Dog Films/RSA, which she has been signed to since 2006.