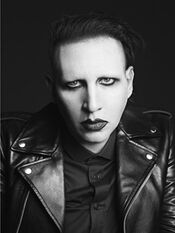 Brian Hugh Warner (born January 5, 1969), better known by his stage name Marilyn Manson, is an American musician and artist known for his controversial stage persona and image as the lead singer of the eponymous band, Marilyn Manson. His stage name was formed from juxtaposing the names of two 1960s American cultural icons, namely, actress Marilyn Monroe and convicted multiple murder mastermind Charles Manson as a critical and, simultaneously, laudatory appraisal of America and its peculiar culture. He has a long legacy of being depicted in the media as a detrimental influence on young people. The seemingly outrageous styles for which he models and the controversy surrounding his lyrics have led to his very pronounced public appeal.