MUGLER is a fashion house founded by Manfred Thierry Mugler in 1975. Manfred Thierry Mugler was born in Strasbourg, FR (21 December, 1948). He's a photographer, stylist, painter, dancer, stage director, set designer, co-writer and specialist in Art Direction and Perfume. When Nicola Formichetti became the creative director, the brand became simply known as Mugler with a new logo; since 2017, the brand's creative director is Casey Cadwallader. Mugler's creations are mainly seen in the music videos for "Paparazzi" and "Telephone". While Nicola Formichetti's creations under MUGLER are seen in the music video of "Born This Way". Mugler's Origami Dress from 1991 was later recreated by The Haus of Gaga in 2008 and 2010-11 for The Monster Ball Tour.

In 2010, Lady Gaga wrote a piece on what she thinks of her personal stylist, Nicola Formichetti’s, new position as creative director of MUGLER.

FAME Perfume (2012)
Add a photo to this gallery

The women's ready to wear collection is a part of the Winter/Fall 2012 line. In the runway show that took place on March 2, 2011, Lady Gaga made her runway model debut. Gaga was the musical director for the show, where she previewed a track from Born This Way called "Government Hooker". 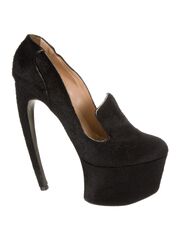 In Fall 2011, Inez and Vinoodh shot a video of Lady Gaga for the Mugler Spring and Summer 2012 Womenswear collection. The video premiered at the Mugler fashion show in Paris on September 28, 2011.

Frederik Heyman (Feb 2020)
Add a photo to this gallery

The men's ready to wear collection is a part of the Winter/Fall 2012 line. The runway show took place on January 19, 2011. Lady Gaga was the musical director for the show, where she remixed and previewed a track from Born This Way called "Scheiße". The promotional model and star of the fashion film by Mariano Vivanco that was used as a backdrop was Rick "Zombie Boy" Genest, who later appeared in the music video for "Born This Way".

Hat made by Nasir Mazhar

Retrieved from "https://ladygaga.fandom.com/wiki/MUGLER?oldid=238293"
Community content is available under CC-BY-SA unless otherwise noted.