Louis Vuitton Malletier, (/ˈluːiː vwiːˈtɒn/; French: [lwi vɥiˈtɔ̃]), or shortened to LV, is a French fashion house founded by Louis Vuitton in 1854. The label's LV monogram appears on most of its products, ranging from trunks and leather goods to ready-to-wear, shoes, watches, jewelry, accessories, sunglasses, and books. It sells its products through standalone boutiques, lease departments in high-end department stores, and through the e-commerce section of its website. For six consecutive years (2006–2012), Louis Vuitton was named the world's most valuable luxury brand. The company operates in 50 countries with more than 460 stores worldwide. 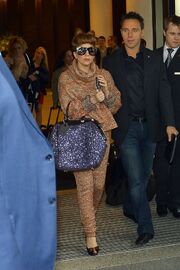 Creative director, Marc Jacobs created a tribute to Stephen Sprouse. It was released in January of 2009.

[1]
Add a photo to this gallery

Leaving the studio
Add a photo to this gallery

The Infinity Kusama Collection was made by Yayoi Kusama for Louis Vuitton with creative director, Marc Jacobs. 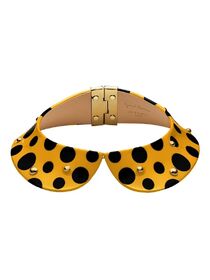 Retrieved from "https://ladygaga.fandom.com/wiki/Louis_Vuitton?oldid=237969"
Community content is available under CC-BY-SA unless otherwise noted.