The Fame Monster era was the second era or first "evolution" of Lady Gaga's career as an artist. The era was very much darker in tone and gothic in ways.The era consisted of the release of her next album/album "The Fame Monster", "The Fame Kills" Tour (which was cancelled) and "The Monster Ball Tour".

For the first time, Lady Gaga appeared on Saturday Night Live, in a comic skit with Madonna and performing a part of her upcoming single "Bad Romance", from her forthcoming studio album titled The Fame Monster. Gaga attended the Human Rights Campaign's "National Dinner" on October 10th, 2009, before marching in the National Equality March in Washington, D.C. "In the music industry there's still a tremendous amount of accommodation of homophobia. [...] So I'm taking a stand," she commented. She then started to perform a rendition of John Lennon's "Imagine" while changing some lyrics to reference Matthew Shepard's 1998 murder, the college student's death which has been a rallying cry for the gay rights movement. "I'm not going to play one of my songs tonight, because tonight is not about me," Gaga said before she sat in front of a grand piano to sing and play, "It's about you." In November 2009 Gaga announced the release of The Fame Monster, a collection of eight songs that dealt with the darker side of fame as experienced by Gaga over the course of 2008–2009 while travelling around the world, and are expressed through a monster metaphor. "Bad Romance" was released as the first single from the album. It topped the Canadian chart while reaching the top ten in the United States, Australia, United Kingdom, Ireland, Sweden. Gaga also announced The Monster Ball Tour associated with the release.

In January, Gaga continued the first leg of The Monster Ball Tour across the United States. At the Consumer Electronics Show on January 7, 2010, she was named creative director for a line of imaging products for Polaroid. She commented that she will create fashion, technology and photography products. "I'm working on bringing the instant film camera back as part of the future." On January 14, 2010, Gaga had to cancel The Monster Ball Tour in West Lafayette, Indiana, due to health concerns; she was having trouble breathing in the hours leading up to the show, and paramedics later stated that she was suffering from an irregular heartbeat as a result of dehydration and exhaustion. The next day, she appeared on The Oprah Winfrey Show where she was interviewed, and performed Monster, Bad Romance, and Speechless. The following three concerts were cancelled, and the tour restarted in New York on January 20, 2010. The New York performance drew in many notable celebrities, including Tyra Banks, Alicia Keys, Janet Jackson, and Madonna. Lady Gaga also scheduled in the shooting for the music video for her second single off The Fame Monster, Telephone. It was filmed on January 28, 2010, featuring R&B artist, Beyoncé Knowles. The music video is scheduled to premiere on February 11, 2010. On January 31, 2010, Lady Gaga starred as the opening act for the 52nd Grammy Awards. She started off with Poker Face, then began her performance of Speechless and Your Song with Elton John. Towards the end of the U.S. leg of the tour, Gaga announced her plan to revamp the Monster Ball with a completely new stage, a new live band and for the first time on tour, background vocalist. For the second time, she performed for the BRIT Awards with an acoustic version of Telephone dedicated to Alexander McQueen and a remix of Dance in the Dark featuring Emma. The new version of the tour debuted on February 18, 2010 in London with a better reception from the press than the first incarnation. During the second week of March, Gaga took a week off to work on some new music before resuming the tour. During the last week of May, Gaga stated that she had taken a lupus test, the same disease that her aunt, Joanne Germanotta, died of. Since then, she has stated that the outcome of the test was negative. She has however said she feels that her heart beats are uneven due to fatigue from performing so much, but continues to add to her Monster Ball Tour.
On August 20th, 2010 around 1:00PM Pacific time, Gaga became the most followed person on the social network Twitter. On May 18 2011, Gaga unseated Oprah in the Forbes Celebrity 100 as the most powerful and influential celebrity in the world. 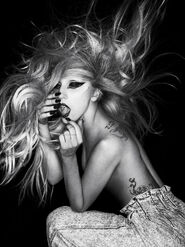 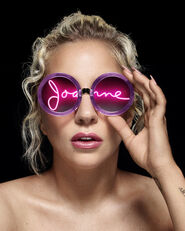