Stefani Germanotta (born Stefani Joanne Angelina Germanotta) was born on March 28, 1986 at Lenox Hill Hospital in New York City, New York. She is the eldest child of Joseph "Joe" and Cynthia (née Bissett) Germanotta. She is mostly of Italian heritage with some German, Scottish, English and French ancestry on her mother's side. She has a younger sister of six years, Natali. She is better known as her stage name, Lady Gaga which she started using in 2007. She usually prefer to be called Gaga instead of simply just Lady or the full nickname. 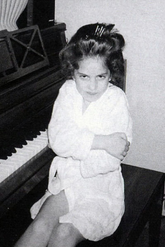 Gaga was raised Roman Catholic. From age eleven she attended the Convent of the Sacred Heart, a private all-girls Roman Catholic school on Manhattan's Upper East Side. She described her academic life in high school as "very dedicated, very studious, very disciplined" but also "a bit insecure": "I used to get made fun of for being either too provocative or too eccentric, so I started to tone it down. I didn't fit in, and I felt like a freak.

Gaga began playing the piano at the age of four, wrote her first piano ballad at thirteen, and started to perform at open mike nights by the age of fourteen. She performed lead roles in high school productions, including "Adelaide in Guys and Dolls and Philia in A Funny Thing Happened on the Way to the Forum". She also appeared in a very small role as a mischievous classmate in the television drama series The Sopranos in a 2001 episode titled "The Telltale Moozadell" and auditioned for New York shows without success. She sang in a classic-rock cover band, Mackin Pulsifer, during her freshman year of high school. The band did covers of Led Zeppelin's songs along with Pink Floyd and Jefferson Airplane.

After high school, her mother encouraged her to apply for the Collaborative Arts Project 21 (CAP21), a musical theatre training conservatory at New York University's Tisch School of the Arts. By age seventeen, after becoming one of twenty students to gain early admission, she lived in an NYU dorm on 11th Street. In addition to sharpening her songwriting skills, she composed essays and analytical papers on art, religion, social issues and politics, including a thesis on pop artists Spencer Tunick and Damien Hirst. She also tried won the part of an unsuspecting diner customer for MTV's Boiling Points, a prank reality television show.

In 2005, Gaga withdrew from CAP21 at 19, in the second semester of her sophomore year, deciding to focus on her musical career. Her father agreed to pay her rent for a year, on the condition that she re-enroll at Tisch if unsuccessful. "I left my entire family, got the cheapest apartment I could find, and ate shit until somebody would listen," she remembers. Settled in a small apartment on Rivington Street towards the summer of 2005, Gaga recorded a couple of songs with hip-hop singer Grandmaster Melle Mel, for an audio book accompanying the children's book The Portal in the Park, by Cricket Casey.

She also began a band called the Stefani Germanotta Band (SGBand) with some friends from NYU – guitarist Calvin Pia, bassist Eli Silverman, drummer Alex Beckham and booking manager Frank Fredericks – in September of that year. The band played a mixture of songs: some self-penned alongside classic rock numbers like Led Zeppelin's "D'yer Mak'er". Playing in bars like the Greenwich Village's The Bitter End and the Lower East Side's the Mercury Lounge, the band developed a small fan base and caught the eye of music producer Joe Vulpis. Soon after arranging time in Vulpis' studio in the months that followed, SGBand were selling their extended plays Words and Red and Blue (both 2005) at gigs around New York while becoming a local fixture of the downtown Lower East Side club scene.

SGBand reached their career peak at the 2006 Songwriters Hall of Fame New Songwriters Showcase at The Cutting Room in June where Wendy Starland, a musician, appeared as a talent scout for music producer Rob Fusari. Starland informed Fusari – who was searching for a female singer to front a new band – of Gaga's ability and contacted her. With SGBand disbanded, Gaga traveled daily to New Jersey to work on songs she had written and compose new material with the music producer. While in collaboration, Fusari compared some of her vocal harmonies to those of Freddie Mercury, lead singer of Queen. It was Fusari who helped create the moniker Gaga after the Queen song "Radio Ga Ga". Gaga was in the process of trying to come up with a stage name when she received a text message from Fusari that read "Lady Gaga." She texted back, "That's it," and declared, "Don't ever call me Stefani again.

Although the musical relationship between Fusari and Gaga was unsuccessful at first, the pair soon set up a company titled Team Love Child in which they recorded and produced electropop tracks and sent them to music industry bosses. Joshua Sarubin, the head of A&R at Def Jam Recordings, responded positively and vied for the record company to take a chance on her "unusual and provocative" performance. After having his boss Antonio "L.A." Reid in agreement, Gaga was signed to Def Jam in September 2006 with the intention of having an album ready in nine months. However, she was dropped by the label after only three months – an unfortunate period of her life that would later inspire her treatment for the music video for her 2011 single "Marry the Night". Devastated, Gaga returned to the solace of the family home for Christmas and the nightlife culture of the Lower East Side.

She became increasingly experimental: fascinating herself with emerging neo-burlesque shows, go-go dancing at bars dressed in little more than a bikini in addition to experimenting with drugs. During this time, she met performance artist Lady Starlight, who helped mold her on-stage persona. Starlight explained that, upon their first meeting, Gaga wanted to perform with her to songs she had recorded with Fusari. Like SGBand, the pair soon began performing at many of the downtown club venues. Their live performance art piece was known as "Lady Gaga and the Starlight Revue" and, billed as "The Ultimate Pop Burlesque Rockshow", was a low-fi tribute to 1970's variety acts. Soon after, the two were invited to play at the 2007 Lollapalooza Music festival in August that year.

While Gaga and Starlight were busy performing, producer Rob Fusari continued to work on the songs he had created with Gaga. Fusari sent these songs to his friend, producer and record executive Vincent Herbert. Herbert was quick to sign her to his label Streamline Records, an imprint of Interscope Records, upon its establishment in 2007.

In January, Gaga and RedOne recorded what will become the first three singles: "Just Dance", "Poker Face" and "LoveGame". Before the album dropped in August, Gaga embarked on a promotional world tour with two female dancers from April to September. By October, she recruted four male dancers to join her on the New Kids on the Block: Live Tour. In early 2009, Gaga began the Doll Domination Tour as the opening act to the Pussycat Dolls. The tour leaded to her first solo tour, The Fame Ball which started in March and ended in September. In the spring of 2009, Gaga released "Paparazzi" as the last single.

While she traveled the globe, she wrote The Fame Monster, an EP of eight songs released in November 2009. Each song, dealing with the darker side of fame from personal experience, is expressed through a monster metaphor. The success of the album allowed Gaga to start her second worldwide concert tour, The Monster Ball Tour, just weeks after the release of The Fame Monster and months after having finished The Fame Ball Tour.

On the road with The Monster Ball in 2010-11, Gaga recorded her third album which was released in May of 2011.

During the second leg of The Monster Ball Tour in Japan, she got a temporary tattoo while on her way to Japan, saying, "リトルモンスター" (Ritoru Monsutā), which means "Little Monster".

Fashion is a major key point in the life of Lady Gaga. She has stated that she is "very into fashion" and that it is "everything" to her. Her love of fashion came from her mother, who she stated was "always very well kept and beautiful."

Outfits worn by Lady Gaga are a mix of high couture designers, young designers from across the world and her own team, the Haus of Gaga. Some of her favorite designers include Chanel, Armani, Gucci.

In 2008, Gaga created the Haus of Gaga, her behind the scenes team that create everything from outfits to art direct the films and various projects. They usually either make the outfits themselves or ask a designers to create the outfits for them.

Each link will include all the photographs she posted on the following websites:

Gaga joined Instagram in June of 2012. She posted her first photos on June 20, 2012. When asked about her lack of profile picture, Gaga explained to fans that she thinks the website is difficult to use. The photographs uploaded are mostly taken from her iPad.

For the complete list of videos, see Videography and Filmography.

For the complete international list of official links, see this page.