Jo Calderone is a fictional male alter-ego to Lady Gaga created in 2010. 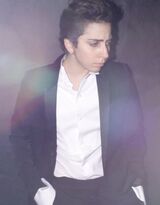 From that idea, they decided to do a men's fashion editorial for Autumn/Winter 2010 Vogue Hommes Japan which took place on June 25, 2010 under the working title ‘Elegant Mechanics’. A couple of days before the shoot, SHOWstudio announced the live streaming of stylist Nicola Formichetti with Nick Knight shooting a men’s fashion editorial for Vogue Hommes Japan: "Expect chic, timeless suiting from Armani, Prada and Saint Laurent contrasted with industrial hardware and custom accessories by Japanese designers Yuima Nakazato, Yoshiko Creation Paris and Noritaka Tatehana". Shorthly after the shoot, SHOWstudio released one "live, straight-up and unretouched" picture a day for a couple of days showcasing grease, grit and gentlemanly attire worn by this new model they found, Jo Calderone.

When these photos were released, it was rumored to have been Gaga, but official confirmation wasn't released until August 23rd, when a video of an interview with Semi Precious Weapons was posted. More clues were revealed when the editorial and interview by Jo-Ann Furniss with Jo was released on October 2010 inside the Vogue Hommes Japan volume 5.

SHOWstudio Shop presented an exhibition named "Inside/Out" (June 26 to August 14, 2010) featuring the urinal, aptly titled Armitage Shanks used as prop during the photo shoot. The following year, from April 15 to July 16 of 2011, the SHOWstudio Shop presented their exhibition named Practice to Deceive: Smoke & Mirrors in Fashion, Fine Art and Film. where they displayed ‘Elegant Mechanics’ a short film made with the live footage of the photo shoot featuring Jo Calderone. The film was shot in the very same room that it was exhibited in: a small space in the basement of the Bruton Street venue that only allows three people to view it at one time.

A few weeks after the cover was printed, Nick said to Gaga: “Gaga, I believe Jo has to sing”. The idea stuck in her head a few months until Jo Calderone returned as a character in the music video for "Yoü and I" and is also featured on both single covers shot by Inez and Vinoodh on the same location. He made his first live appearance at the 2011 MTV Video Music Awards on August 28th, 2011. Jo did a monologue and sang "Yoü and I" on the piano before doing a dance routine and ended the song with Brian May. For 2 days leading up to the performance, Gaga became Jo Calderone and went to do Bikram Yoga and was also shot by Terry Richardson.

Laurieann Gibson talked about the choice of having Calderone appear at the ceremony:

Yoü and I Music video

Jo Calderone wears a headband by AND_i, a jacket by Givenchy, a t-shirt by Uniqlo, pants by Gucci, and custom boots by Dr. Martens.

Jo Calderone wears a jacket, pants and a shirt by Dior Homme.

Jo Calderone wears a coat and pants by Giorgio Armani.

Jo Calderone wears a jacket, pants and a shirt by Dior Homme.

Jo Calderone wears briefs by Hanes, an outfit by Dior Homme, and boots by Chanel.

On September 1, 2011, Gaga announced on her Twitter account that she had shot five "fashion films" related to the music video of the song, with Dutch photographer duo Inez van Lamsweerde and Vinoodh Matadin. After the tweet, Gaga released the first video, titled "Haus of Ü Featuring Nymph".

"We built a studio in a pig sty and worked for three days with her constantly coming off set to us and filming with us and taking pictures. What's incredible in there is that this is Gaga, as herself in the character that she is, related to the 'Yoü and I' video, and it's purely her." They went on to explain of Gaga: "She asked us to make these videos as a bridge between fashion and rock and roll, and since both are kind of equally important for her as an inspiration and starting point. So, she really said to us, 'Do your thing, what you would do in fashion context,' let's say, but relate it to the characters that she is in the 'Yoü and I' video."

Lady Gaga wears pants by Brooks Brothers, a t-shirt by Uniqlo, and shoes by Dr. Martens.