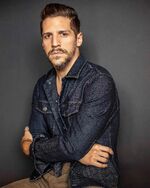 Jeremy Hudson (born October 31, 1986) received most of his training in South Carolina. Thereafter a few short years of training, he competed on the national renown television show "Star Search" as part of a trio. After getting a taste of the industry, at age 17, he followed his dream back to California to pursue a dance career. Jeremy has been a part of feature films: Bedtime Stories, Dance Flick, Bring It On 5, Hannah Montana The Movie, Princess and The Frog, Step Up 3D, and had a featured dance role in the remake of Fame. Television Shows: Glee, Eli Stone, So You Think You Can Dance, American Idol, America's Got Talent, The Oprah Winfrey Show, The Jay Leno Show, and has danced and choreographed for Dancing with the Stars. He has also worked on commercials, award shows, and music videos, and can recently be seen dancing with Lady Gaga on The Monster Ball Tour. Appeared in the music videos for "Telephone", "Alejandro", "Born This Way", and "Marry the Night". He also appeared in the ABC special A Very Gaga Thanksgiving.

He is currently in a relationship with fellow dancer, Mark Kanemura.

Jeremy and his paws up

Go back to dancers