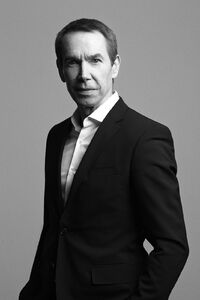 Jeffrey "Jeff" Koons (born January 21, 1955) is an American artist known for his reproductions of banal objects—such as Balloon animals produced in stainless steel with mirror-finish surfaces. He lives and works in both New York City and his hometown of York, Pennsylvania.

Reference to his work

In the past, Gaga referenced his works through her live performances.

The blue ball is a reference to his "Gazing Ball" series.

Jeff Koons collaboration with Haus of Gaga will be shown at artRave in New York City on November 10, 2013.

"The first time that I met Lady Gaga was at the Metropolitan Museum's annual ball, the fashion ball [on May 3, 2010]. And Gaga performed and she did a fantastic performance. Afterwards, I was with Miuccia Prada and Gaga came up to say 'hello' to Miuccia and I was introduced to her and it was amazing. She just kind of grabbed ahold of me and gave me a big hug around my waist and she just said, 'You know, Jeff, I've been such a fan of yours, and when I was a kid just hanging out in Central Park I would talk to my friends about your work.' I was thrilled. I had just watched Gaga give an incredible performance and I was always a big fan. It was very meaningful. So that was the first time I met her. And that was probably about three years ago." - Jeff Koons

Koons explained to MTV how he was asked to join the ARTPOP project: "I guess in late spring of this year we received a telephone call, my studio, from Brandon [Maxwell], a very close friend of Gaga's, her stylist that she works with. And [he] said that there was interest that I would work on the album." For ARTPOP, Jeff Koons designed the cover and the booklet along with a statue of Lady Gaga. Before the creation of the statue, Koons took photograph of Gaga in a studio with a "Gazing Ball" in different poses for the sculpture. Pictures of that day were included for the cover and the booklet for ARTPOP.

Vinyl
Add a photo to this gallery

Retrieved from "https://ladygaga.fandom.com/wiki/Jeff_Koons?oldid=226435"
Community content is available under CC-BY-SA unless otherwise noted.