This page is a list of outfits created by or with the Haus of Gaga through the years 2009 and 2010 during The Fame Monster era.

The Razor-Blade Sunglasses are a pair of specially designed sunglasses by Tom Talmon Studio after an idea by the Haus of Gaga. So far, the glasses have only been used in the 2009 music video for "Bad Romance". Lady Gaga told MTV, she wanted “to design a pair for some of the toughest chicks and some of my girlfriends — don’t do this at home! — they used to keep razor blades in the side of their mouths”. What she wanted to project is “that tough female spirit. It’s meant to be 'this is my shield, this is my weapon, this is my inner sense of fame. This is my monster'”. 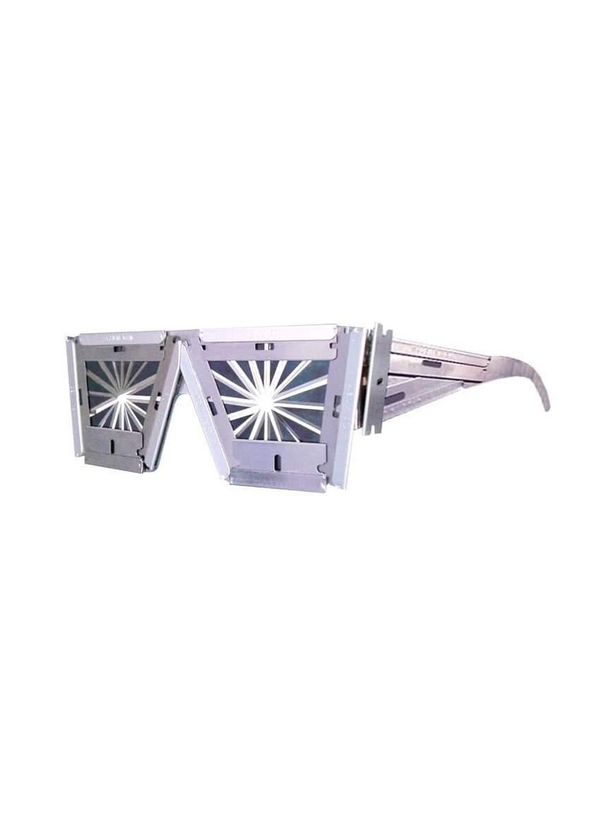 The Monster Pods are medium-sized capsules used in the music video for Bad Romance at the beginning of the video after the introduction. The pods are completely white, except for Lady Gaga's, which has the trademark cross (†) and "Monster" written on it. The pods resemble the shape of coffins, but they are round and are built in the shape of an oval.

The Skeleton Suit was an outfit used for the American Music Awards and the Monster Ball Tour: Theater version on November 27 to December 21, 2009. The suit was made by Muto-Little Costumes with the skeleton part by Gary Card with lighting by Tom Talmon Studio.

On the Monster Ball: Theater Version, Gaga used a different suit underneath.

The Burnt Piano is a piano that was created by the Haus of Gaga. The piano is colored black, and can spurt fire by control.

The piano was first debuted at the American Music Awards in 2009 while Gaga performed Speechless. During the performance, Gaga also pulled a control which caused flames to spew from the piano. The piano is also used during The Monster Ball Tour. Tom from Tokyo Hotel wrote on his blog on November 26, 2009: "Lady Gaga was so fascinated by our EMA performance that she called me a couple of days ago to ask how we did the burning piano and whether she could also do the same for her “Speechless” performance at the American Music Awards. Well, of course artists help each other and I think that she did a pretty awesome job What do you think?"

In collaboration with the Haus & Nasir Mazhar, Gaga debuted the body sized version on Saturday Night Live. It was also used in the music video for "Bad Romance". Each individual ring can move in either direction.

This was another piece by Mazhar & the Haus of Gaga, which has only been shown at The Monster Ball Tour. This orbit is slightly larger, and is connected to a platform, on which Lady Gaga stands. This is shown during the performance for the song "Bad Romance", and previously "Eh, Eh (Nothing Else I Can Say)".

The Monster-Claw Piano is a dual piano used by Lady Gaga and Elton John at the 52nd Grammy Awards, designed by Terence Koh. It was manufactured from a full Baldwin “R” acoustic piano, fitted with a midi-trigger interfaced with John’s personal sonic choices, and attached to various pieces of a Baldwin “R” shell which was previously used in the 1972 film, The Poseidon Adventure.
In addition, the Haus of Gaga worked with Koh to create the striking thirty-two decorative arms mounted on top of the instrument. According to Gaga in an interview with "Kidd Kraddick in the Morning" radio show, the hands are meant to represent the thirty-two pieces on a chess board. During the Grammy Award's performance, some hands were removed for camera angle reasons. When the camera is viewed from above, it forms a heart shape.
Gaga purchased the piano for $470,000.

The Half-Smoked Cigarette Glasses are seen in the music video for "Telephone". They're half-smoked cigarettes, glued onto black Ray-Ban sunglasses. The concept of the glasses was conceived on set by Lady Gaga and Nicola Formichetti.

The studded bra and underwear are pieces created by the Haus of Gaga for "Telephone." Lady Gaga would later re-wear them as part of her wardrobe for the 2010 White Tie and Tiara Ball.

The leopard bodysuit is a piece created by Muto Little-Costumes for Haus of Gaga. Lady Gaga wore it as part of her wardrobe for the 2010 arena version of The Monster Ball Tour.

The Monster Ball Tour
Add a photo to this gallery

The 88 Pearls outfit was created by the Haus of Gaga and Terence Koh. The outfit inspiration comes from Koh's piece, the "Boy By The Sea."
The outfit consists of a white hat, jacket, bra, underwear and boots. Lady Gaga's entire outfit, as well as her face and body, were covered in pearls. The name of the look comes from the fact that before the appearance at the amfAR New York Gala, Koh and Gaga counted 88 pearls into a teacup.

The Disco Torch is a new disco stick model much larger than the original Disco Stick, a yellow light is given off when the torch is turned on. It was first seen at the Monster Ball: Arena Version on February 26th 2010 during the performance of "LoveGame". Since then, this version of the Disco Stick been used throughout the Monster Ball Tour. Lady Gaga uses it as a flashlight (or "Torch"), before "Boys Boys Boys" to "get a good look" at the audience and see what they're wearing.

The Living Dress is a dress inspired by designer Hussein Chalayan, and built by Vinilla Burnham for the Haus of Gaga in 2010. Prior to it's debut, Lady Gaga posted a statement about it on her Twitter.

The dress was inspired by Hussein Chalayan creations. Lady Gaga wanted an original piece for The Monster Ball Tour, so Vinilla Burnham was contacted to create the dress. It was created at Elstree Studios, the same studio where the giant Angler Fish was constructed. Creation of the dress began in the third week of January, 2010. Burnham kept in contact to finalize the design and the fabrics for the dress. Anantomic designer Adam Wright that helped create Chalayan's dress helped with the dress. The dress was finished two hours before its debut, taking six total weeks of creation. The fabrics used were stainless steel, various forms of nylon fabrics, sheet and rods, different weights of plastic sheeting and coutil for the corset. The dress is very heavy, but the weight was distributed so that the dress would be wearable.

Adam Wright stipulated weight and any potential obstructions with the materials so that his mechanics could run smoothly and not get caught up. In the beginning of a performance where the Living Dress is used, two pieces from Gaga's breasts cover her face, and, in the Monster Ball, the pieces move out of her face, and she begins to sing "So Happy I Could Die". The headdress opens and closes, and body of the dress opens and closes, revealing her legs, and the train of the dress moves up and down, "just like a dragonfly coming out of its shell." The headdress, dress movements and face fans are all connected to motors and remote-controlled from offstage. Wright used an elaborate system of motors and pulleys to pull the skirts up and back, and to enable the wings to spring up from behind Gaga’s back (which she operates herself with bungee chords).

Gaga's body-double trying on the dress

Sketch
Add a photo to this gallery

The Angler Fish, or The Fame Monster, is a prop used for the 2010-2011 version of The Monster Ball Tour built by the Jim Henson's Creature Shop. When the song, "Paparazzi" begins, the fish appears out of the darkness and its eyes, mouth, and antenna light up, glowing yellow. As the song continues he 'takes off' Gaga's skirt, revealing a leotard. Gaga then puts her Pyro-Bra and kills the Monster with help from her fans, because Gaga can't kill the Monster Ball by myself. Lady Gaga says that the whole story behind the fish is that when she was younger, the fish was one of her biggest fears. She says that it's really great defeating her fear on every night of her show. The Angler Fish is puppetered by her dancers, with 2-3 dancers operating each tentacle. The Angler Fish might represent fame. Fish are attracted to the angler's light, only to have the angler eat it when it gets too close, just like at people are attracted to fame, only to get killed by the paparazzi.

During the performance Lady Gaga tells the arena that it's called The Fame Monster.

Rose from Henson Creature Shop describes the Fame Monster as "a cross between a deep-sea angler fish and an octopus." The designers asked for eight tentacles, but Rose and the Henson people talked them down to six.

"It's insane really," says Rose. "You're given four weeks to build this thing. The creature itself probably weighed in at two-thirds of a ton. That had to be counterbalanced so it would float in the air, so it had a ton and a half of stage weights behind it.

The Eternal Fountain is a prop used for the 2010-2011 version of The Monster Ball Tour. The fire spewing, angel shaped fountain is seen during the performances of "Teeth" and "Alejandro". During Act 3: Central Park (Forest), Gaga and her friends find the fountain, the only fountain that bleeds for you. Gaga then goes into "Alejandro" while she jumps into the fountain and sings as blood pours over her. It was also used for Lady Gaga's American Idol appearance in 2010 during the "Alejandro" performance. The inspiration behind the fountain is the Bethesda Foutain found in New York City's Central Park.

American Idol
Add a photo to this gallery

The Men's High Waisted Shorts are pieces used in the music video for "Alejandro". They are worn by the back-up dancers.

Outfit(s) designed by the Haus of Gaga and created by Perry Meek.

Add a photo to this gallery
Retrieved from "https://ladygaga.fandom.com/wiki/Haus_of_Gaga/The_Fame_Monster?oldid=248286"
Community content is available under CC-BY-SA unless otherwise noted.