In May of 2008, the Haus debuted a series of catsuits inspired by Willi Ninja for the Just Dance Promo Tour. They created one catsuit in black that is open in the back, this particular one was worn the most. The Haus also created a black catsuit with red and the last one was white with black pieces. Most of the time, she wore a vintage belt with chains with the catsuit.

The Haus debuted in May of 2008 a series of long jacket with oversized shoulder pads. The jacket was inspired by a creation by Maison Martin Margiela Spring/Summer 2008 collection. They created a first one in black and the other a navy blue. It was followed by a yellow (sunglow) and a red (scarlet) one in July of 2008. {C}

The Haus Headset is a headset microphone that is sound triggered to light up.
Gaga mainly used the headset throughout late 2008 to mid-2009. Gaga debuted the piece on So You Think You Can Dance during "Just Dance". It is often accommodated by the iPod LCD Glasses. New Kids? Light up where the microphone is located (and the side).

MuchOnDemand (2008)
Add a photo to this gallery

The Origami Crystals Dress is a serie of bustiers and skirts made by the Haus of Gaga in 2008 and 2009. They recreated the dress for the Monster Ball in 2010 with a new green skirt with more crystals and a bodysuit.

The dress was inspired by a Thierry Mugler creation for his Spring/Summer 2008 collection which featured a very similar design but of a different color.

The dress debuted during the New Kids on the Block Tour in white on October 8, 2008. The black "leather" version debuted on November 30, 2008. Two new version, one made of smoked plastic and the other in black "vinyl" were added in rotation with the previous one during the Doll Domination Tour. The dress was worn various times during televised interviews and live performances. A slightly altered version of the dress appeared in a picture posted by Lady Gaga on Twitter captioned "MONSTER BALL POST-OPERATION: In a scene titled Battling a Paparazzo".

2nd clear version (This version doesn't come with a skirt.)

Monster Ball 2010
Add a photo to this gallery

The Mirrored Dress is a dress worn, mainly during Lady Gaga's tours. The first version of this dress was largely black, with hand rests built into the skirt, and two large glass covered triangular segments. A latter version of the dress would completely replace the black with mirror shards. Another variation of the dress, which included no mosaic mirror tiles, was also worn during her supporting act in Take That's Wembley performance. Underneath the dress, Gaga wears a second black lace skirt. {C} During the The Fame Ball Tour, Gaga performed "Paparazzi" with the dress along with the Mirrored Mask surrounded by her dancers with miror walls. These walls were created by Tom Talmon Studio.

The Bubble Dress is a creation by the Haus of Gaga. The dress is inspired by a very similar one created by Hussein Chalayan for his Spring 2007 show. In 2010, the Haus of Gaga created a new dress inspired by the same show, The Living Dress. {C} The dress was created around the time "Paparazzi" was released as a single. The dress has been seen during the performances of the acoustic version of "Poker Face", and "Future Love" during The Fame Ball Tour. The dress is encompassed with plastic bubbles of all sizes. Later during her european leg of the tour, the dress was replaced with a bubble vest. The concept is the same but it's a vest rather than a dress and is easier to remove for her festival performance. 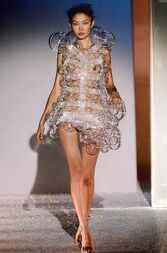 The Skeleton Suit was an outfit used for the American Music Awards and the Monster Ball Tour: Theater version on November 27 to December 21, 2009. The suit was made by Muto-Little Costumes with the skeleton part by Gary Card with lighting by Tom Talmon Studio.

On the Monster Ball: Theater Version, Gaga used a different suit underneath.

Grey shoulder pads
Add a photo to this gallery
Retrieved from "https://ladygaga.fandom.com/wiki/Haus_of_Gaga/The_Fame/Tours?oldid=233607"
Community content is available under CC-BY-SA unless otherwise noted.