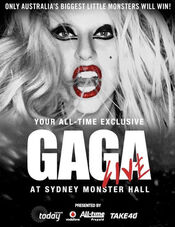 Gaga Live at Sydney Monster Hall was an Australian exclusive concert headed by Lady Gaga. On May 29, 2011 it was announced that Gaga would be heading to Australia in July to promote the release of her third studio album, Born This Way. The concert itself was held on July 13th and was held at the Sydney Monster Hall (The Sydney Town Hall). This was her only Australian showcase for Born This Way in 2011.

The 'All Time Exclusive Event' was presented by 2Day FM, Vodafone All-time Prepaid and Take 40 and was aired on July 29.

Lady Gaga spoke to Australia’s Sunday Herald Sun about her upcoming visit to Australia. She revealed that she was holding a special one-off concert event in the Sydney Town Hall on July 13. The town hall, which will be renamed “The Sydney Monster Hall” for this one off event, held an intimate concert with fans who had won a national radio competition.

The concert was aired across Australia on Austereo networks, Nine Network's GO!, and Channel [V] on July 29. Speaking about the upcoming stop, Gaga revealed:

"I can’t wait, I feel like it’s been 100 years. I’m so excited about that, I can’t wait. Just to be able to kiss and touch and hold the fans again is going to be such a wonderful feeling."

Starting June 8, Gaga fans had to enter a contest via the Take 40 Australia Facebook page by uploading a photo that shows them just how much of a little monster they are. This was the only way for fans to get tickets as none were sold.

Note: "Telephone" and "Alejandro" were not aired on the televised program.

Retrieved from "https://ladygaga.fandom.com/wiki/Gaga_Live_at_Sydney_Monster_Hall?oldid=247815"
Community content is available under CC-BY-SA unless otherwise noted.