The Born This Way era began on January 1, 2011, the day Lady Gaga announced the release date of the new album. During this era, Gaga had prostetics, short bangs, then starting in May, Gaga had half blond, half black hair like Cruella de Vil. Gaga is also seen wearing leather and black metallic clothing.

"Judas" (On set pics by Meeno)

"The Edge of Glory" (On set photos by Meeno)

"Yoü and I" (On set pics by Inez and Vinoodh)

"The Lady is a Tramp" (On set pics by Kelsey Bennett)

"Marry The Night" (On set pics by Terry Richardson Studio)

The Born This Way Ball Tour

These pictures were taken before/during/after an event where Gaga performed in 2011 or 2012. Technically, they are not "photoshoots". 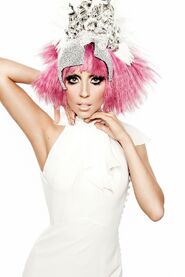 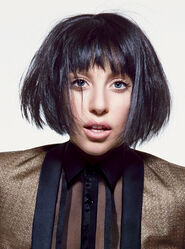 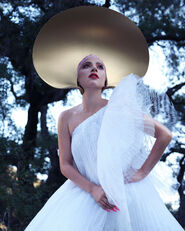 2020: Chromatica
Retrieved from "https://ladygaga.fandom.com/wiki/Fashion/Born_This_Way?oldid=260678"
Community content is available under CC-BY-SA unless otherwise noted.