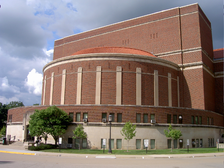 The Elliott Hall of Music is located on the Purdue University campus in West Lafayette, Indiana, USA. With a seating capacity of 6,005, it is one of the largestproscenium theaters in the world. The facility is named after Edward C. Elliott (1874–1960), who served as President of Purdue University from 1922 to 1945. The stage of the hall is one of the largest in the country. It is roughly the same size as the stage of the Dolby Theatre in Hollywood, California.

Retrieved from "https://ladygaga.fandom.com/wiki/Edward_C._Elliott_Hall_of_Music?oldid=175379"
Community content is available under CC-BY-SA unless otherwise noted.