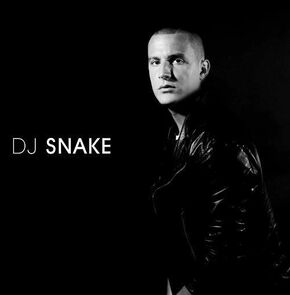 DJ Snake (born William Grigahcine in 1986) is a producer, Disc Jockey based out of Paris, France.

In 2010, Snake recalled that "Lady Gaga was looking out for new talent to produce her album and my music seduced her. It was a real gamble. Lady Gaga ordered me two sounds. I sent two instrumentals that subsequently became Bloody Mary and Government Hooker." His work on Born This Way earned him a Grammy nomination for Album of the Year in February 2012. DJ Snake revealed that "Government Hooker" was supposed to be a single but was scrapped when the record company stopped the marking of the album.

He described Gaga as someone with "a strong personality but at the same time, she is one hell of a talented person." DJ Snake also shared a bit of her work ethic: "Lady Gaga is working with a very closed team. She is super professional. What she wants is to bring fresh music. She's the best pop artiste today in terms of creativity and talent. She does not follow the hype, she's the hype."

In 2012, DJ Snake collabored again with Gaga on a few songs including "Do What U Want".

Retrieved from "https://ladygaga.fandom.com/wiki/DJ_Snake?oldid=152302"
Community content is available under CC-BY-SA unless otherwise noted.