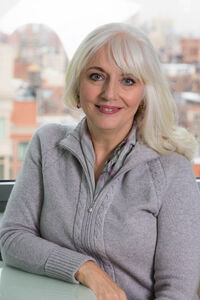 After she married Joseph Germanotta, she worked in telecommunications at Verizon.

Cynthia, Cheryl and Paul are the maternal grandchildren of Vincenzo "James" Ferrie (died on 1967) and Filomena "Minnie" Campana (née Ferrie) (died on 1940). Originally:

Vincenzo (in 1905) and Filomena (in 1913) immigrated to the United States from Broccostella (Frosinone, Lazio, Italy).