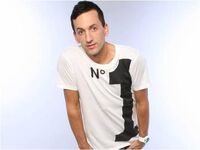 Clinton Sparks (born September 18, 1979) is a producer from Boston.

In 2012, Clinton Sparks was contacted by one of his friends, DJ White Shadow to be involved in the recording of Born This Way. Sparks explained that they worked on music using iChat and e-mails. "They would give me feedback so I'd send him back more stuff and then him and Gaga would take it from there, add a little magic to it, and then we got the songs," explained Sparks in interview with Crave Online in 2012.

Songs by Lady Gaga that he remixed: