For other uses, see Chromatica (disambiguation).

Gaga revealed the inspiration behind the album's title in an interview with Zane Lowe on Apple Music's Beats 1. "I think what I've learned is that I can view the world in whatever way I choose to see it, and it doesn't mean that I'm deleting the bad things, it just means that I can reframe my life experiences", she said. "I live on Chromatica, that is where I live... I found Earth, I deleted it. Earth is canceled. I live on Chromatica".

Chromatica's symbol was explained to Zane Lowe by Gaga as follows: "The symbol for Chromatica has a sine wave in it, which is the mathematical symbol for sound, and it's from what all sound is made from, and, for me, sound is what healed me in my life period, and it healed me again [during] making this record, and that is really what Chromatica is all about; It's about healing and it's about bravery as well and it's really like... when we talk about love I think it's so important to include the fact that it requires a ton of bravery to love someone".

Continuing on the album's inspiration and concept Gaga said:

"BloodPop® brought it up, and we talked about how Chromatica was essentially on its own when you first look at it, it seems to be about colors and all the different colors and also music is made of a chromatic scale, you know? So it's all the colors, all the sounds, you know, so we, we're talking about inclusivity and life and also a lot of what we see around us and what we're experiencing is math, which is very much like music and sound is math as well. So we talked about that, and then I sort of went back and I said, 'OK, well, yeah, it's inclusivity but it's really a way of thinking', you know, it's not just, 'Oh, Chromatica, we're being inclusive with all the colors, all the people', and when I say, 'All the colors, all the people', I mean way more than we could possibly fathom.

I think that we're actually operating on a completely rudimentary level where we square things off into very simplified colors when actually we're all extremely different in a vast variety of ways that stem from both, like, genetics as well as epigenetics, like, we're all completely different and I thought OK, well maybe, Chromatica is a frame of mind. And that is my frame of mind, and I don't know that I've ever made an album that wasn't on Chromatica in some type of way, meaning like my frame of mind is always a part of my music, and this is just my way of kind of expressing, even in a both literal and abstract way, that, like, making music and putting it out into the world is my perspective on life, and it's also my gift to the world in the best way that I can, and I think that everyone on any given day is doing the absolute best that they can do, and this is my perspective, and here it is, and it's always been my perspective, but now I know that it was my perspective."

Nicola Formichetti talked about Chromatica in an interview for Vogue.

In an interview New Music Daily with Zane Lowe on Apple Music which was released on the day of release of "Stupid Love" (February 28, 2020) Lady Gaga talked about the meaning she put into this album:

Lady Gaga surprised Zane Lowe when she shared that a lot of songs from "Chromatica" were recorded in her private studio at her Hollywood Hills home.

In the end of NikkieTutorials' video with Lady Gaga on YouTube which was recordered on December 2, 2019 and published on December 5, 2019 makeup artist gifted the singer with some Christmas ornaments and Gaga joked that one of the ornaments was actual the cover of her future LG6 album ("Chromatica"), saying: That's my album cover LG6 [...] It's done already. That's LG6, the whole time. That's is coming out with our next drop for Haus Laboratories as well. Just remember this look.

On April 5, 2020, Gaga revealed the cover artwork via social media. The photograph was taken by Norbert Schoerner, while graphic design was handled Travis Brothers, Bryan Rivera, Isha Dipika Walia, and Darío Alva. Gaga was styled by her longtime collaborator Nicola Formichetti and Marta del Rio. A physical artwork version was prematurely revealed earlier in the day by an online music retailer.

In an interview for Vogue Nicola Formichetti talked about what the album cover and the clothes that Gaga wore for the photoshoot of it symbolize in terms of fashion. "The blend," says Nicola Formichetti, is seen from the outset: the cover depicts Lady Gaga strapped to a metal shield-slash-symbol; the squiggle is called a “sine,” and it represents the elasticity of sound. But it’s what she’s wearing that’s most intriguing: on one foot, a violent boot with a knife-blade heel, created by Cecilio Castrillo . On another, a shoe with a semi-ritualistic animal horn heel, created by Gasoline Glamour. Her outfit consists of welded claws by Gary Fay, leather belt straps , one-armed metal plating, icing-pink hair, and even a pseudo-collar made of octopus tentacles. It’s an assemblage of the outré costumes that originally helped to cement Gaga’s fame.

In response to tabloid reports saying she might be pregnant, Gaga tweeted on March 12, 2019, "Rumors I'm pregnant? Yeah, I'm pregnant with #LG6." Several news outlets speculated the tweet alluded to a release within a nine month window, the typical span of a human pregnancy, but the anniversary has since come and gone, proving the theory to be false. In October 2019, she jokingly announced via Twitter that the album would be called Adele after the English singer-songwriter of the same name. In January 2020, several news outlets reported that the album's lead single was scheduled to be released in early February, with the album's release following soon afterwards.

The album's title and release date were officially announced on March 2, 2020, through Gaga's social media accounts with an artwork featuring Chromatica's symbol on a pink background with "LG-6" stamped on the corner. Gaga confirmed that the image is a placeholder "This is not the album cover but we made it for you to enjoy in the meantime". The pre-order for the album was made available with the announcement. On March 24, Gaga announced in a statement on Instagram and other platforms that the release would be postponed until later that year due to the coronavirus pandemic.

First of all, I want to make sure everyone is staying safe and practicing social distancing. Please know that I'm thinking of you all.
I wanted to tell you, that after a lot of deliberation, I've made the incredibly tough decision to postpone the release of Chromatica. I will announce a new 2020 release date soon.
This is such a hectic and scary time for all of us, and while I believe art is one of the strongest things we have to provide joy and healing to each other during times like this, it just doesn't feel right to me to release this album with all that is going on during this global pandemic.
Instead I prefer that we spend this time focusing on finding solutions. It's important to me that the attention is on getting essential medical equipment to healthcare professionals, making sure kids who depend on public schools for meals get the assistance they need, and that we help those who will be financially impacted by this pandemic.
As you may have also heard, MGM sadly had to postpone my Vegas shows from April ‪30-May‬ 11 due to guidelines about public gatherings from the CDC. I'm hopeful that my other Vegas shows in May will continue, and we'll update you as soon as we have any new information. I also definitely plan to see you on the road for my CHROMATICA BALL tour this summer!
I had so many fun things planned for us to celebrate together… I had a secret Coachella set lined up, and a lot of other fun surprises, some of which I'm still planning to share with all of you very soon! Chromatica is still very much on the way and I can't wait.
To my fans, I love you. I know you are disappointed. Probably angry and sad. But I also know that as a fan base… as a family… we are strong, we are loving and we are the kindness punks. So I ask you to practice that kindness in these trying times.
I hope you can see that when the album does come out, I want us to be able to dance together, sweat together, hug and kiss each other, and make it the most bombastic celebration of all time. And until that time comes, LET'S ALL STAY HOME! But I promise you that when we can go out again, I'm going to make it SO MUCH FUN. I can't wait to be dancing with you all!
⚔️💓
—Lady Gaga

On April 5, 2020, Gaga revealed the cover artwork via social media after a physical cover was prematurely revealed earlier in the day by an online music retailer. Some day another statement about album delay was revealed on Gaga's official website.

On April 22, 2020, an American retail corporation, Target, accidentally leaked the tracklist for Chromatica on its website, where the album was available for pre-order. It didn’t take fans long to spot it, and after much hype and social media pickup, Lady Gaga herself revealed the tracklist of the album on the same day on her Instagram.

Out now poster on ladygaga.com

For Your Consideration poster

"Rain On Me"
(with Ariana Grande)

On March 5, 2020, Gaga announced she would embark on The Chromatica Ball tour to support the album. The six-date trek is scheduled to begin on July 24, 2020, in Saint-Denis, France and end on August 19, 2020, in East Rutherford, United States. 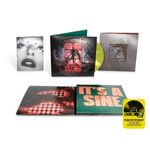 Five editions of Chromatica were produced on cassettes. They all share the same standard album tracks but have different cassette and tape colors along with slightly different visuals. 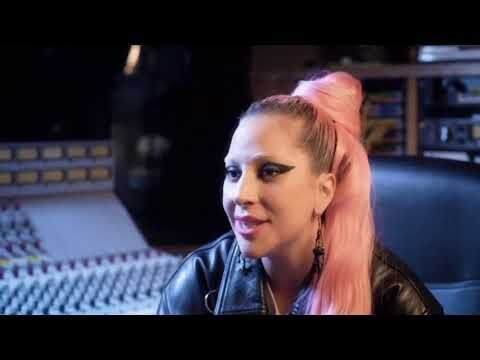 IICONI is a collectable frame that offers a unique journey to the heart of Chromatica. This photo frame gives you access to an app where you can find music, videos, photos, news and stories. The album, in Deluxe Edition with 3 extra track, is available for HD FLAC download and optimized streaming 320 kbs.The dimensions of this aluminum frame is 30x30 cm, it's the same size as a standard 12" vinyl. This release is limited to 550 Individually numbered copies.

"In the Light" beige hoodie

"In the Light" black hoodie

"In the Light" green hoodie

Retrieved from "https://ladygaga.fandom.com/wiki/Chromatica_(album)?oldid=262464"
Community content is available under CC-BY-SA unless otherwise noted.