Children in Need is an annual British charity appeal organised by the BBC. Since 1980 it has raised over £500 million. The highlight of the Children in Need appeal is an annual telethon, held in November. A teddy bear named "Pudsey Bear" fronts the campaign, while Terry Wogan is a long standing host. Children in Need is one of three high-profile British telethons, the others being Red Nose Day and Sport Relief, both supporting the Comic Relief charity. 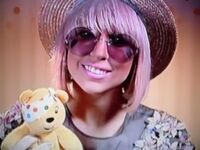 Hello, this is Lady Gaga.
There are thousands of children all over the UK who could really use your help. So please, pick up the phone or go online and just give what you can.
Thank you so much, have a great evening, and here's what's still to come.

Add a photo to this gallery
Retrieved from "https://ladygaga.fandom.com/wiki/Children_in_Need?oldid=201485"
Community content is available under CC-BY-SA unless otherwise noted.