The Car Film is an interlude featured on Joanne World Tour directed by Lobster Eye.

In this interlude Lady Gaga is seen wearing her iconic pink Joanne hat while racing around an empty parking lot in a light denim blue Ford Mustang. Bright pink smoke engulfs the car and the video ends with Gaga exiting the car and walking into the distance.

Lady Gaga is wearing a pink hat by Gladys Tamez and high boots by Balenciaga. The brands of the white tank-top and shorts are unknown but customized by Haus of Gaga.

This Interlude has a special soundtrack, produced by DJ White Shadow and BeazyTymes. The soundtrack can be heard during the actual Interlude because Lobster Eye released the Interlude. 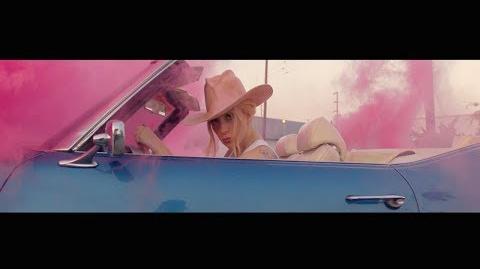 Some of the pictures of this Interlude were used for the official Joanne World Tour merchandise.

Retrieved from "https://ladygaga.fandom.com/wiki/Car_Film?oldid=242150"
Community content is available under CC-BY-SA unless otherwise noted.