Cable News Network-Indian Broadcasting Network (CNN-IBN) is an English-language Indian television news channel. The network is a partnership between Global Broadcast News (GBN) and Turner International (Turner) in India (a subsidiary of Time Warner). Rajdeep Sardesai is the Editor-in-Chief of the network. The Indian company GBN runs the channel completely but uses the CNN brand name, in return gave 26% stake to Time Warner.

The network broadcasts 24-hour a day, 365 days a year. The network models most of its programming on that of United States cable news provider CNN, with current-event talk programs mixed with news reports. The flagship evening program is India at 9 (known for breaking news events, such as the 11 July 2006 Mumbai train bombings and the 2008 Mumbai attacks). It is one of the first news channels in India to use the concept of citizen journalism, whereby any person can send in a report that will be aired in a separate section.

Lady Gaga gave her first interview for Indian television from backstage at The Tonight Show with Jay Leno. She was interview by news correspondent Amrita Tripathi. On the show, Lady Gaga discussed a wide range of topics, including the Grammy Awards, held the previous day, her family, her youth and insecurities, Whitney Houston, Madonna, "Born This Way", her Little Monsters, fashion, performing, her plans to come to India, and her advocacy for LGBTQIA rights.

Lady Gaga spoke at an Indian press conference at Taj Mansingh Hotel in New Delhi upon arrival for her first visit to India. CNN-IBN took news coverage of the event. 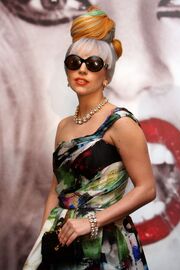 Lady Gaga was interviewed by news correspondent Amrita Tripathi. She discusses her experiences and plans in India, how she intends to reach out to Indian Little Monsters, her upcoming performance on F1 Rocks After Party, why she chose her name to be "Lady Gaga," what her India fashion will be like, and who her favorite Bollywood star is

[1]
Add a photo to this gallery

Retrieved from "https://ladygaga.fandom.com/wiki/CNN-IBN?oldid=151247"
Community content is available under CC-BY-SA unless otherwise noted.