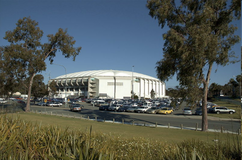 The Burswood Entertainment Complex was located on the Swan River some five minutes from the city of Perth, Western Australia, and is owned by Crown Limited.

Despite early controversies regarding sound quality and poor sight lines (which resulted in many fans walking out of the venues opening concert featuring Mick Jagger), the venue became popular with many international artists, including Lady Gaga and Micheal Jackson. It was also home to the Hopman Cup tennis tournement until 2011.

In 2012, the new Perth Arena opened in the city centre. As a result, the Dome (then named Crown Dome) was no longer fnacially viable. It officially closed in early 2013, and was demolished in July and August to make way for a new carpark.

Lady Gaga's next performance in Perth will take place at Perth Arena on August 20, 2014.

There were no changes fashion wise between this concert and the previous concert at Adelaide Entertainment Centre.

Part of the reloaded The Monster Ball Tour.

Part of The Born This Way Ball Tour.

Retrieved from "https://ladygaga.fandom.com/wiki/Burswood_Dome?oldid=172193"
Community content is available under CC-BY-SA unless otherwise noted.