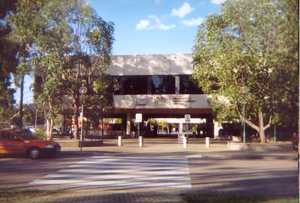 The Brisbane Entertainment Centre (BEC) is a centre, located in Boondall, a Brisbane City suburb, in Queensland, Australia.

The arena has an assortment of seating plans, which facilitate the comfort of its users, subject to performance. Specific seating plans usually are allocated, depending on the performance and the size of its audience. The general seating arrangements are end stage mode, "in the round" and intimate mode, which only uses half of the arena.

It also has a sporting complex and many other smaller function rooms, which are available to hire for wedding receptions, business functions and the like.

Part of the Doll Domination Tour, Lady Gaga was the opening act. There were no changes fashion wise between this concert and the previous concert at Vector Arena.

Part of The Born This Way Ball Tour.

Part of artRAVE: The ARTPOP Ball.

Retrieved from "https://ladygaga.fandom.com/wiki/Brisbane_Entertainment_Centre?oldid=199391"
Community content is available under CC-BY-SA unless otherwise noted.