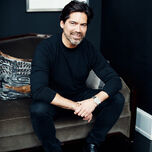 Brian Atwood is a former model who designed footwear for Versace before launching his own Milan-based label in 2001. Atwood is American of Mexican descent. He studied at the Fashion Institute of Technology before becoming a model. He attended Joliet Catholic High School in Joliet, IL., and studied art and architecture at Southern Illinois University. He further studied clothes design at the Fashion Institute of Technology (FIT) in New York, NY.

Retrieved from "https://ladygaga.fandom.com/wiki/Brian_Atwood?oldid=258557"
Community content is available under CC-BY-SA unless otherwise noted.