The Book of Gaga is the name of the highly stylized art table book housed in a custom slipcase documenting Gaga's journey into pop super stardom included in the Super Deluxe Fame Monster Pack of The Fame Monster.

Upon the first opening, the book is housed in a black cardboard slipcase wrapped in plastic with a red sticker on it. The back of the slipcase feature the content of the book along with the pressing number out of the 10 000 copies printed. Members of the press received an unnumbered copy.

[B]
Add a photo to this gallery

The book itself when removed from the slipcase is wrapped in a tinted red plastic along with two collectible cardboard puzzles. The first is a picture from the July 15, 2009 photoshoot with Markus Klinko & Indrani [A] and the second from the July 7, 2008 shoot with Gitte Meldgaard [B]. The cover of the Book of Gaga is made in a mirror-like foil with "LADY|GAGA" written on the front.

Back
Add a photo to this gallery

This first part of the book include an introduction by Lady Gaga with the 2 CDs, 3D glasses and a lock of hair as bookmark. 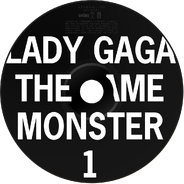 The first page of the book feature a picture taken on February 24, 2009 by Slam Photography. Inside of it, a special 2 sided all black CD The Fame Monster (Censored, 8 tracks) and a bookmark made from a lock of Lady Gaga's hair from the Candy Warhol wig. 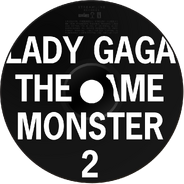 [P7]
Add a photo to this gallery

[Page 5]
I. Manifesto of Little Monsters
There's something heroic about the way my fans operate their cameras. So precisely and intricately, so proudly, and so methodically. Like Kings writing the history of their people. It's their prolific nature that both creates and procures what will later be perceived as the "kingdom." So, the real truth about Lady Gaga fans lies in this sentiment: They are the kings. They are the queens. They write the history of the kingdom, while I am something of a devoted Jester.

It is in the theory of perception that we have established our bond. Or, the lie, I should say, for which we kill. We are nothing without our image. Without our projection. Without the spiritual hologram of who we perceive ourselves to be, or rather to become, in the future.

I'll be lonely too,

And this is the fame.

12
Add a photo to this gallery

The 2nd part of the book consists of duplicate of The Fame booklet printed on smaller papers.

"Lady Gaga"
Add a photo to this gallery

① Outfit by Yvonne Lau in Toronto, Ca on June 19, 2009, ② "Vilsbøl de Arce" July 8, 2009 , ③ "Chanel jacket" Night of the taping of Barbara Walters Most Fascinating People of 2009, ④ You brought back the Super Fan, ⑤ "Korea 'BBQ Bandits'", ⑥ Black cone wig is by Charlie Le Mindu with a piece by Iris van Herpen in Manila, August 10 2009, ⑦ Lady Gaga and Perez at the MuchMusic Video Awards of 2009, ⑧ Lady Gaga and Nicola Formichetti, ⑨ Lady Gaga and her dad with a Platinum Records from Canada, ⑩Lady Gaga and Dada before her MuchMusic Video Awards performance, ⑪ "Gaga Bunny! by Maison Michel xoxo. Dita emailed me thought I stole her ears! Love her."

① "My old apt where I wrote "The Fame" :( " 176 Stanton street in New York City, ② Dancers and Nicola before the MuchMusic Video Awards of 2009, ③ Lady Gaga in her hotel room, ④ Lady Gaga on an airplane, ⑤ Rehearsal for the MuchMusic Video Awards, ⑥ Gaga signing a box of cigarettes, ⑦ "Berlin Wall", ⑧ "The photo that almost got me arrested in RUSSIA :) I have it lol" Saint Basil on April 25, 2009 in Russia, ⑨ Gaga in a piece by Lie Sang Bong in Korea on August 9 of 2009, ⑩ Lady Gaga nude on a bed.

① "Perfecto", ② Lady Gaga and Nicola Formichetti in Toronto, ③ "Hair bow: a representation of how to be a fashionable with no money. Made w love+spirit+ one great idea" (Vest by ???)

Sketch of the Molded Top.

The Making of the Molded Top in early 2009. One of the different models created, this one is the silver version.

Custom Blue Catsuit from the music video of Poker Face (2008).

Top: Lady Gaga before the photo shoot for Vogue Homme Japan in 2009. Bottom: Lady Gaga and Alexander McQueen in London on July 14, 2009.
Add a photo to this gallery

"Everyone said we would crash at Fest. But we had the most torn? Pop prevaled"
Add a photo to this gallery

"Haus of GaGa Styled. Anna Trevelyan makes catsuit out of Gavre from Belguim Pharmacy", "Vamp teeth represent my transformation as artist" Before the shooting with Ellen von Unwerth for OUT Magazine.

"Obsessing over my new muses. Miss you girls...you little monsters, be home soon xx in norway hustlin. 9:57 AM Jul 30th"

"just got off stage in brussels, incredible audience. lovegame leaked today. i call this "video rape." loveyou to all my fans. so so much xxg 1:16 PM 2009 Feb 13th"

"Coffee and a ciggy in Denmark, making hair sculptures, writing music....I could find truth in this red lipstick all day. the joys of a wench" 6:36 AM Jul 31st"

Lyrics to Speechless and Dance In The Dark

Lyrics to Telephone and So Happy I Could Die

Fan art by Carlos (carlos003)
Add a photo to this gallery

The last part of the book consists of a Gaga paper doll made on waxed paper with various paper props.

Retrieved from "https://ladygaga.fandom.com/wiki/Book_of_Gaga?oldid=134359"
Community content is available under CC-BY-SA unless otherwise noted.