The Bloody Space Film (also known as White Christmas Film) is a video directed by Nick Knight and edited by Ruth Hogben in 2012. Part of the footage was initially recorded on November 8, 2009 to be used as backdrops for The Monster Ball Tour during "Just Dance", "Paparazzi" and "Bad Romance". The film was released on December 25, 2012 with Lady Gaga's cover of "White Christmas".

The footage shows duplicated silhouettes of Gaga walking with white lights projected on her in the beginning. This footage is part of the "Paparazzi" film shooting. After the first scene fades to black Gaga appears again now wearing a McQueen dress and a different headpiece. She is dancing to a song in slow motion moving around in a room with black fabric on the wall. At the same time someone is playing with the camera lens for getting a trippy effect. This footage belongs to the shooting of the Bad Romance and Just Dance backdrops.

A second video part from this film was also released featuring more footage from the shooting with the McQueen dress, Gaga moves around too but now her full body can be seen for some seconds, and she is shown as the reflection of a Christmas Tree gazing ball.

Another version of this film was initially intended to be used for "Beautiful, Dirty, Rich" playing in fast motion while the image is warping and distorting. 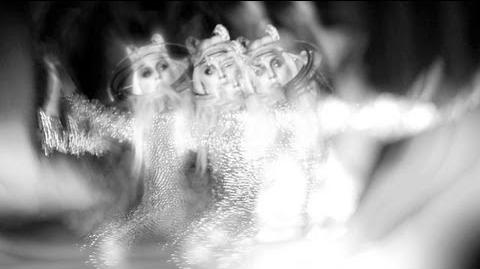 Retrieved from "https://ladygaga.fandom.com/wiki/Bloody_Space_Film?oldid=261907"
Community content is available under CC-BY-SA unless otherwise noted.