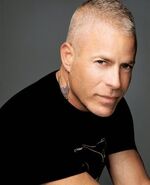 Billy Brasfield also known as Billy B., is a makeup artist. Since arriving in New York City in 1985 from Aberdeen, Mississippi, Billy B has become one of the most successful and sought after makeup artists in the Fashion and Entertainment industries. Working and living in both New York City and Hollywood, California.

Billy designed the look of the Monster Ball and traveled for 10 days or so to establish the look for both the Theater and Arena versions. On tour, Tara Savelo recreated Billy's design.