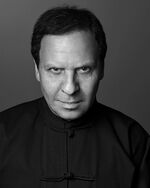 Azzedine Alaïa (Arabic: عز الدين عليّة‎ ‎French pronunciation: ​[azedin alaˈja], pronunciation: Alaya) is a Tunisian-born couturier and shoe designer, particularly successful since the 1980s. Alaïa was born in Tunis, Tunisia, on 26 February 1940, and he died from an acute myocardial infarction on 18 November 2017. His parents were wheat farmers but his glamorous twin sister inspired his love for couture. A French friend of his mother fed Alaïa's instinctive creativity with copies of Vogue. He lied about his age to get himself into the local École des Beaux-Arts in Tunis, where he gained valuable insights into the human form and began studying sculpture. After his graduation, Alaïa began working as a dressmaker's assistant. He soon began dressing private clients, and in 1957 he moved to Paris to work in fashion design. In Paris, he started to work at Christian Dior as a tailleur, but had to leave five days later as the Algerian war broke out, soon moved to work for Guy Laroche for two seasons, then for Thierry Mugler until he opened his first atelier in his little rue de Bellechasse apartment the late 1970s.

Retrieved from "https://ladygaga.fandom.com/wiki/Azzedine_Ala%C3%AFa?oldid=237368"
Community content is available under CC-BY-SA unless otherwise noted.