The ARTPOP app was an application for mobile on Android and iOS compatible devices with ARTPOP. Gaga hired Relative Wave and her newly created company TechHaus for the project. The back end development is handled by Cloud City Development. These teams worked together for 12 months to create the app.

On launch date, Gaga explained that some of the app features were not included in order to test the server capacity and that they would be released in the next "few weeks". Soon after the release of the app in 2013, Gaga left Atom Factory and decided to move on from projects that was involving her previous management which included, the ARTPOP app. The app was decommissioned on September 30th, 2015.

On September 5, 2012, Gaga revealed through Little Monsters her plan to release an application for computers and mobile devices such as Android and iOS (iPhone/iPad). The application would include the album along with interactive chats, films for every song, extra music, content, Gaga inspired games, fashion updates, and magazines.

On September 6, 2012, Gaga responded to the comments left by fans following her announcement and stated that she believes that "applications" are the future of music as the way to sell albums. She clarified that Artpop is a project and the app is one of the many upcoming projets related to it.

On October 17, 2012, Gaga posted on Little Monsters and crossposted it on Twitter ("selfie #littlemonsters http://littlemonsters.com/post/507ecac462d66da908002a2e") with the following caption: "ARTPOP app meeting in an hour. Leave your ideas below so Haus can take notes". It is unknown if this was the first or a follow up meeting.

On October 29, Gaga commented that the app "IS COMING ALONG AMAZING" and that she fly back to Chicago often to see Taylor and to work on the app. She also added that the developers involved are "all like 22 [years old] and genius kids".

On July 12, 2013, it was announced the ARTPOP app would be available for pre-order on September 1st. Here is the description of the app, "Built by TechHAUS, the technological branch of HAUS OF GAGA, the app itself is a musical and visual engineering system that combines music, art, fashion, and technology with a new interactive worldwide community 00 “the auras.” Altering the human experience with social media, we being ARTculture into POP in a reverse Warholian expedition.

Exploring Gaga’s existence as a cultural interface, the user will share in the “adrenaline of fame” as they build and share their own projects, chat with one another, and watch in real-time on a virtual globe as ARTPOP explodes onto the physical and virtual universe at once on November 11, our “BIG BANG!” On this day HAUS OF GAGA venues with forte to bring the music industry into a new age where art drives pop, and the artist once again is in control of the “icon.”"

The app is "a musical and visual engineering system that combines music, art, fashion, and technology" with an interactive worldwide community, the auras.

The phase 1 version includes an interactive video experience with the interface of the application, Petga, along with a 3D modeling tool that allows users to create multi-media GIFs to communicate through visuals. Listen to the album, chat with fans on LittleMonsters.com and enter into the world of ARTPOP.

Petga is the name of the virtual assistant that users experience upon launching the app for the first time. She will guide them through the creation process of an "aura" which is required to have in order to access the other features. Each user has their own individual aura, which will change over time as they take part in various activities in the application.

In July of 2013, Gaga revealed the first information on Petga describing it as "exploring Gaga's existence as a cultural interface, the user will share in the 'adrenaline of fame' as they build and share their own projects, chat with one another, and watch in real-time on a virtual globe as ARTPOP explodes onto the physical and virtual universe at once."

After Petga introduces herself, the user has to type in their name, accept to share their device's location and take a picture of yourself with your camera, it then "scans your aura",  and asks you to choose characteristics that you identify with most from a list (Artistic, Entrepreneurial, Poetic, Social, Techy, Visionary, Athletic, Psychic, Musical and Philosophical).

The app then asks what artistic expressions interest you the most (Painting, Graphic Design, Sculpture, Theatre, Film, Fashion Design, Photography, Drawing, Music and Dance), which themes from ARTPOP you're most interested in, and which lyrics "represent you in the ARTPOP universe" (Aphrodisi from "Venus", kinda dirty from "Sexxx Dreams", stupid attractive from "Jewels N' Drugs", cosmic lover, enigma from "Aura", that G.U.Y. from "G.U.Y.", addicted2Love from "MANiCURE", Dolce vita from "Donatella", for life from "Gypsy", and squealer from "Swine")

You're then presented with your aura: a glowing orb of light that will travel and grow with you, the more you use the app.

The ArtHaus is a 3D modeling tool. The tool also includes the ArtHaus Exhibition which has a tab for the most popular GIF, most recent, and those seen by Gaga.

Via the app, users can chat with fans on LittleMonsters.com. 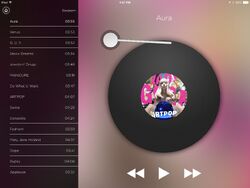 Inside the app, users can listen to the album directly with the application. To unlock this feature, users are required to validate their ARTPOP purchase (CD, digital or they can buy the album inside the app).

The player is a virtual vinyl turntable with a movable needle to rewind or fast-forward the song. It continues playing while you explore other sections of the app, and also runs in the background if you switch to other apps.

On the day of the release for the app, "Trackstar" and "GagaTV" were both locked with a countdown leading to April 1, 2014. Due to Gaga leaving Atom Factory in 2013, progress for the app stopped. Asked by a fan on Twitter, Gaga explained it saying "i have moved on from anything having to do with previous management. New music, new manager, new promotion. Life is amazing." Prior to her tweet, Max Weisel of Relative Wave expained to fans also on Twitter that the situation was out of his control and that he couldn't do anything.

This feature was supposed to be unlocked on April 1, 2014, but was not. A few weeks before the release of the App, Gaga revealed that users will be able to use the stems from ARTPOP and play with them to create various remixes of the songs. The 'Trakstar' feature is rumored to give you a preview of behind the scenes into the album ARTPOP, and artRAVE: The ARTPOP Ball.

On July 25, 2012, Gaga revealed her plans to release a film for each track on ARTPOP. She further revealed that she has yet to decide whether there will be one or more films for each track. The following day, Gaga released the first episode of "Monstervision", the name is a mix between "Monsters" (fans) and "Gagavision" (her online series). She announced a contest to select a fan to direct one of the films for the album.

Retrieved from "https://ladygaga.fandom.com/wiki/Artpop_(album)/App?oldid=251599"
Community content is available under CC-BY-SA unless otherwise noted.