The Apocalyptic Film (also known as City Film or Rising Block Film) is an interlude used in both versions of The Monster Ball Tour. All the interludes and backdrops from the show were created by Nick Knight (director), Ruth Hogben (editor), Kevin Stenning (computer 3D artist), and BURSTvisual (special effects).

The first version of this interlude was shown once during the opening night of The Monster Ball Tour in Montreal, 27 November 2009. For the rest of the dates, the interlude has been replaced with the Monster Film. The interlude returned to the set list using different editing and effects for the reloaded tour. Footages from previous backdrops of the original Monster Ball were cut and added in this short film.

The Apocalyptic Film was first created as a part of the story of the original Monster Ball as the last step before her "rebirth", the City Film. The first scene displayed an appearing and disappearing gun with Gaga's silhouette inside. The second scene was a city being built (rising) with a couple of Gagas with her body and a crow shape hat on her head on top of some of the buildings. The third and final scene was the city fading and the gun again but leaving only it shape to reveal Gaga's body.

The reconstructed version removed the gun sequence completely from the film. The first scene is some smoke leading to an extract from the "Paparazzi" backdrop from the first edition. The second scene is a reconstructed version of the city rising with smokes as background. The third scene is some footage from the backdrop of "Paper Gangsta" also from the first edition of the tour. The last scene is showing Gaga's smoking. On June 2, a new scene from the film was added to replace the star scene. The scene shows Gaga was playing a cigarette between her teeth and the scene gradually become the smoke in the previous scene. The music used on both version is the same remix of "Girls" by Style of Eye which was also used during the Raven interlude. The official video of this version was posted by SHOWstudio on October 7, 2011.

Last scene, behind the gun.

The same footage for Poker Face. 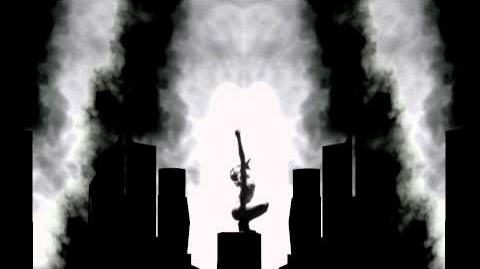