Alexander McQueen is a luxury fashion house founded by designer Lee Alexander McQueen (born in Lewisham, London, the UK on March 17, 1969 – died in Mayfair, London on February 11, 2010). Its current creative director is Sarah Burton. McQueen was also chief designer Givenchy from 1996 to 2001 and for founding his own label under the name Alexander McQueen. His achievements in fashion earned him four British Designer of the Year awards (1996, 1997, 2001 and 2003), as well as the CFDA's International Designer of the Year award in 2003.

The BRIT Awards performance of an acoustic rendition of "Telephone", was a dedication to the fashion designer, who had then-recently died by suicide. Along with this, she also debuted her newest creation, Emma, a keytar (Keyboard/Guitar).
About an hour prior to the starting time of the award ceremony, she commented on her Twitter page about her performance.

"Fashion of His Love" is a song Gaga wrote to him as a tribute. His name "McQueen" is mentioned in the second verse. The song was one of the first song written for her third album, Born This Way.

A limited-edition of 1500 numbered copies of Visionaire's tribute to Alexander McQueen. The issue included a collection of images by Nick Knight, Gaga, Steven Klein, Mario Sorrenti and more, each printed on a piece of paper embedded with wildflower seeds that will actually blossom if you plant them and give them enough sun. Plus, the case features a metalized brocade detail from the designer's final collection. All in all, a very romantic collector's piece.

"Alejandro" Music video (2010)
Add a photo to this gallery 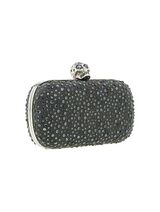 Steven Klein (2015)
Add a photo to this gallery

Plato's Atlantis by Alexander McQueen was the Spring/Summer 2010 show, presented in Paris, and was made available for streaming live on the internet. The live webcast had glitches, reportedly from Lady Gaga sending tweets to her fans in regards to the debut of her single, "Bad Romance". Alexander McQueen brought out the imagination of ancient history and myth in a show, using symbolic animal and alien-like fashion. Plato’s Atlantis reveals a blend of historical and futuristic imagery that depicts the imagination of the Atlantean mythology. Snakes, water, animal prints and moving camera’s that resemble animal-like machines brings the viewer into a world of Atlantean ambiance of the technologically advanced. Some of the clothes used in the show were worn in the music video for "Bad Romance", such as the Dragon Heels (12 inches, iridescent black, white) and the Armadillo Stilettos (12 inches, snake pattern).

The Manifesto of Little Monsters film 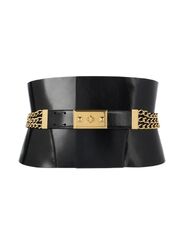 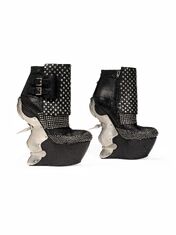 Cheek To Cheek Documentary (2014)
Add a photo to this gallery 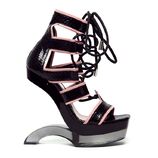 American Horror Story: Hotel (2015)
Add a photo to this gallery

Daniel Jackson (2019)
Add a photo to this gallery

Go back to Shoes

Retrieved from "https://ladygaga.fandom.com/wiki/Alexander_McQueen?oldid=253656"
Community content is available under CC-BY-SA unless otherwise noted.